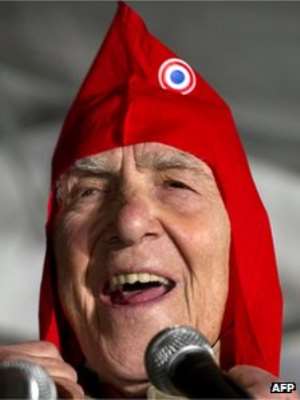 A German by birth, he was imprisoned in Nazi camps during World War II for his activities in France.

In Time for Outrage, he called for a new form of "resistance" to the injustices of the modern world.

He expressed outrage at the growing gap between haves and have-nots, France's treatment of illegal immigrants and damage to the environment.

The Indignados protest movement in Spain was inspired by Hessel's manifesto, according to Spanish media.

The 95-year-old's name was the top trending term on Twitter in Spain and France on Wednesday morning, as admirers paid tribute with quotes such as: "To create is to resist, to resist is to create."

Camp survivor
Born of Jewish origin on 20 October 1917 in Berlin, Hessel arrived in France at the age of eight.

A naturalised French citizen from 1939, Hessel became a prominent Resistance figure, says French news agency AFP. He was arrested by the Gestapo and later sent to the Buchenwald and Dora concentration camps.

After the war, Hessel worked as a French diplomat at the UN, where he was involved in compiling the Universal Declaration of Human Rights.

However some, like the French Jewish activist Gilles-William Goldnadel, have accused him of exaggerating his role in the work.

According to Mr Goldnadel, France's leftist press idealised the former Resistance fighter, a strong critic of Israeli policy, as a "secular saint".

Hessel's diplomatic postings also included Vietnam in the 1950s and Algeria in the 1960s.

In France, he took up the cause of illegal immigrants and championed the rights of the oppressed.

Time for Outrage, which has sold more than 4.5m copies in 35 countries, argues that the French need to again become outraged like those who participated in the wartime Resistance.

Whether Hessel inspired the global Occupy movement, as some have argued, is more open to debate.