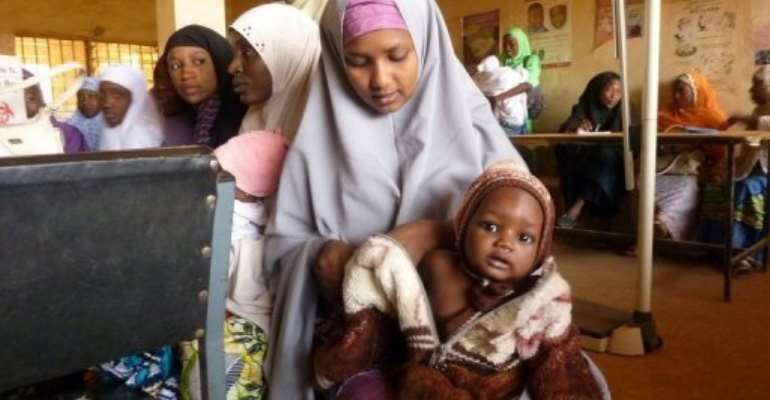 A child waits for polio vaccination at a public health centre in Kano, northern Nigeria, on February 13, 2013. By Ben Simon (AFP)

KANO, Nigeria (AFP) - Walking with wooden crutches because polio robbed him of the use of his legs, Aminu Ahmed Tudun-Wada is determined to prevent superstition and misinformation crippling efforts to vaccinate against the disease.

"If the West wanted to kill you, it doesn't have to be through polio (immunisation)," said the 53-year-old head of a polio victims' association in the Nigerian state of Kano.

"Most of the medicine you take is imported," but somehow not subject to the same fears of clandestine sterilisation, he said.

Nigeria, one of only three countries where polio is still endemic, has long grappled with conspiracy theories surrounding vaccines against the crippling disease, but deadly attacks this month have given the issue a new and frightening focus.

On February 8, gunmen opened fire at two clinics where vaccination workers had gathered, killing at least 10 people in Kano, Nigeria's second-largest city and the biggest in the country's mainly Muslim north.

The shootings came two days after a popular radio programme revived a dangerous theory that many wished had long disappeared in Nigeria -- hinting that vaccines were part of a Western plot against Muslims.

In the days before the attacks, a controversial Muslim cleric in the city of Zaria, Awwal Adam Albani, made fiery comments suggesting the West was concealing information about vaccinations.

There has been no proof that the killings were linked to either the radio programme or the cleric's speech, with the culprits still at large.

However, such conspiracy talk deeply concerns Nigerian government officials working to stamp out polio and philanthropists such as Bill Gates, whose foundation has pushed hard to eradicate the disease.

Similar suspicions about the vaccine in Pakistan have led to the killing of at least 19 people since December. Besides Nigeria, Pakistan and Afghanistan are the other two countries where the disease remains endemic.

Poliomyelitis is transmitted by a virus that enters the body through the mouth, usually in faecally-contaminated water or food.

It affects mainly children under the age of five, with one in 200 infections leading to irreversible paralysis, usually in the legs, often within hours of infection.

Of those paralysed, five to 10 percent die when their breathing muscles become immobilised.

Tudun-Wada is part of a campaign to educate Nigerians about the benefits of vaccination, which has caused infections to drop from 350,000 world-wide in 1988 to only 650 in 2011.

In an interview with a US television programme in January, Gates spoke about conspiracy theories undermining the campaign in Nigeria.

"Once a rumour like that gets out, it's very hard to stop the damage," the Microsoft co-founder said.

"In fact, to this day, which is almost a decade later, in parts of northern Nigeria there is 20 percent of the households that the parents won't give the vaccine unless we bring in the religious leader and he really reassures them that 'no, this is safe.'"

Claims that polio vaccines are a Western tool used to sterilise Muslims grew prominent in Nigeria's north about a decade ago and spread so widely that the state of Kano had to pause immunisations in 2003.

Kano is one of several areas in north Nigeria hit repeatedly by Islamist extremists Boko Haram and gunmen tied to the group may be responsible for the clinic attacks.

But some say the violence may have been an eruption of a bitter political rivalry between two parties battling for control of the state. Polio vaccines have in the past played a role in populist political rhetoric in Kano.

Two journalists and a cleric have been charged with "inciting disturbance" over the radio programme that preceded the murders.

Wazobia journalist Mubarak Sani had been at Rabo's home at the time, and claimed in a story that officials used rough tactics -- manhandling him and seizing his voice recorder and other news equipment.

The programme's presenter, Yakubu Musa Fagge, hinted at, but did not articulate, claims during the same broadcast that polio vaccines are part of a Western plot.

"Go and tell the World Health Organisation that I know what is in (the) polio vaccine," he said in the Hausa language widely spoken in northern Nigeria.

He also accused local leaders in Kano of having "signed a contract with the white man from the West."

Rabo, Fagge and Sani have pleaded not guilty and have been freed on bail.

Nigerian authorities have suspended the station's broadcast license in Kano.

The station claims it is targeted for being critical of Kano governor Rabiu Musa Kwankaso, but others in Kano say Wazobia is aligned with the opposition All Nigerian Peoples Party.

Nigerian authorities have pledged to push ahead with vaccination programmes, but fears are likely to linger for some time.

Activists like Tudun-Wada, whose legs began to weaken after his second birthday and quickly became unusable due to polio, say they will continue to educate the public.