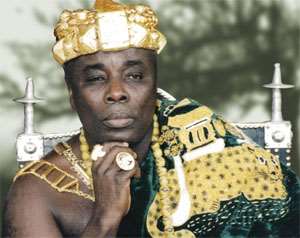 The Eastern Regional executives of the National Democratic Congress (NDC) say they owe the Okyenhene, Osagyefo Amoatia Ofori Panyin, no apology for describing his visit to the presidency as “politically sponsored”.

This is in reaction to the apology issued by former Eastern Regional Minister Ambassador Victor Emmanuel Smith to the Okyehene over unsavory comments made by some executives of the NDC on his person following his visit to the Flagstaff House last Wednesday.

The statement issued and signed by Ambassador Smith said “I wish therefore to use this platform to set the records straight and to apologize profusely on behalf of the Party in the Region to the Regional House of Chiefs, and Okyehene in particular, who was cited in person in the altercations on the airwaves in rather disparaging language”.

But on Asempa FM's Ekosii Sen programme Wednesday, the Eastern Regional vice chairman of the NDC, Alhaji Sumaila stated unequivocally that “Victor Smith cannot apologize on our behave without our consent”.

According to him, after the December polls they have not met or spoken to the former Regional Minister therefore he cannot issue a statement to apologize on their behave.

Alhaji Sumaila expressed grave displeasure about the apology, adding that “we owe Okyenhene no apology".

He intimated that the executives have taken a hard-line position not to apologize because they are convinced the Okyenhene's visit to the Flagstaff House last Wednesday was to please the NPP.

The NDC man noted that all they sought to do as regional executives was to set the records straight and to point out where the Okyenhene, as the President of the Eastern Regional House of Chiefs, erred in his comments.

He said the Paramount Chief should have used the opportunity to outline the problems confronting the region rather than showing his political colours.

Alhaji Sumaila underscored that no one among the regional executives made disparaging comments against the Okyenhene to warrant any apology.