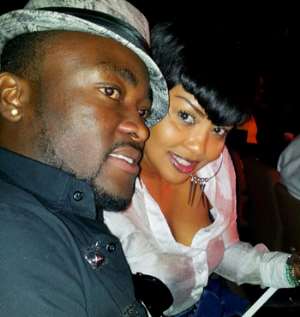 Information gathered by DAILY GUIDE indicates that Maxwell Mensah, the supposed lover of Ghanaian actress Nana Ama McBrown, will be sent to court by the police for dangerous driving.

The two were involved in a ghastly motor accident last week.

Maxwell would face trial, together with John Kofi Dzebevi, driver of the Opel Vectra car which was involved in the accident with the Black Range Rover car which nearly claimed the life of the popular Ghanaian actress last Wednesday.

DSP Ernest Acheampong, the Tesano Divisional MTTU Commander, said both drivers fell foul of the law and would be sent to court for various road traffic offences.

The charges would include causing damage to street lights, neglecting road signs and dangerous driving among others.

This would be the second time Maxwell Mensah would be charged for road offences, having been arrested together with Emmanuel Paa Kwesi, and Mzbel, known in private life as Nana Ekua Amoah, in June 2011 for road traffic offences and assaulting a police officer on duty.

Nana Ama McBrown and Maxwell Mensah were involved in a motor accident in Accra during the early hours of Wednesday on the notorious NI Highway at Abeka Lapaz in Accra.

The two were cruising in the black Range Rover four-wheel drive on the George Walker Bush Motorway when a car reportedly crossed them around 1:30am, just when they had reached the Abeka Lapaz end of the motorway.

Maxwell was driving the car when the accident happened.

The car's airbags burst, the front right door got mangled, and the lights and window glasses were smashed, with the tyres falling off.

DSP Acheampong said the two would be charged because they failed to watch oncoming vehicles upon reaching the section where the lights showed amber.

He said it was not an offence to cross a traffic light when it showed amber at night, but it becomes an offence when both parties refuse to acknowledge oncoming vehicles and thus cause an accident.

Both men would be held liable for the offence, even though they both had their driver's license.

Nana Ama McBrown, the talented actress, was returning from Osu to Gbawe with Maxwell Mensah after shooting a movie, when an Opel Vectra saloon car crossed their Range Rover under the Abeka Lapaz traffic lights.

The accident occurred under the traffic light and at the spot where an 11-year-old pupil was killed a little over a week ago.

The Range Rover with the licence plate, DV 8468-13, was coming from the Akweteyman area towards Gbawe.

Upon reaching the Abeka Lapaz traffic lights, the amber lights were on, so Maxwell Mensah drove on without watching, sources said.

The Opel Vectra, registered GR 922 R and being driven by John Kofi Dzebevi, and coming from the Abeka Police post area, crossed the road without watching.

The two vehicles collided in the middle of the road.

Even though the family of Nana Ama McBrown, who was recuperating at the Yaa Asantewa Ward (F2) of the 37 Military Hospital,  had denied her relationship with  Maxwell, the publicist of the actress said the two were lovers and they had been 'hanging out and doing what lovers do several times'.

On January 1, DAILY GUIDE spotted the two having a jolly good time, petting and touching each other at the pool side of the Golden Tulip Hotel in Accra.

Mzbel Angle
Already, the same Maxwell had been widely speculated as being the man responsible for the pregnancy of sensational musician, Mzbel, although this had not been confirmed.

What was certain was that Maxwell was managing Mzbel and her music career.

It was also not certain if Maxwell was still Mzbel's manager.

Maxwell was one of the two other persons arrested together with Mzbel in June 2011 after they reportedly assaulted a policeman at Tudu in Accra.

Mzbel was in the Mitsubishi 4X4 vehicle alongside Emmanuel Paa Kwesi, and Maxwell (Mensah) Mawuli.

The police officer on duty around that period at the Tudu traffic light had realized there was heavy traffic on a section of the road which obstructed the free flow of vehicles.

The officer, in his attempt to identify the cause, realized it was caused by a Mitsubishi 4×4 vehicle with registration number GR9470-11, driven by one Emmanuel Paa Kwesi.

He therefore requested to see the driver's license of the driver, and the suspect hurriedly left the driver's seat and handed over to Maxwell who was reportedly rude to the policeman.

But the policeman, who was not deterred by the conduct, insisted on seeing the license of Emmanuel Paa Kwesi.

Maxwell ignored his request, started the vehicle and ran into the cop who fell on the bonnet of the vehicle while Maxwell drove away at top speed, regardless of what happened to the police officer.

A private security van, with a policeman on board, chased and finally blocked the Mitsubishi car on the main road to ensure the trio did not escape.

The three were later sent to court and fined.
By Linda Tenyah