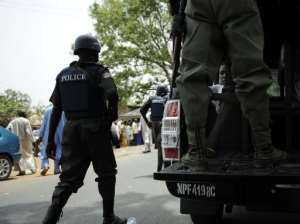 KANO, Nigeria (AFP) - Suspected Islamist extremists have killed 15 Christians by slitting their throats in an attack on a village in Nigeria's volatile northeast, residents and a relief source said Sunday.

The gruesome violence was the latest to be blamed on Islamist extremist group Boko Haram, though this Christmas season has been notably less bloody than in 2011, when attacks on churches and other locations left scores dead.

"From the information we gathered, the attackers broke into selected homes and slaughtered 15 people in their sleep," the relief official said on condition of anonymity because he was not authorised to speak publicly.

Authorities had previously confirmed the predawn Friday attack in Musari, but gave few details and said only five were killed. Musari is located on the outskirts of Maiduguri, Boko Haram's base.

Lieutenant Colonel Sagir Musa, spokesman for a military task force in the area, told AFP on Sunday that he stood by the toll of five dead, adding that some were shot and others attacked with machetes.

Nigerian authorities tend to under-report death tolls however, and the relief official's information matched up with that of residents, who spoke of 15 people having their throats slit.

Speaking of the victims, the relief official said "they included one traffic warden and 14 civilians. The victims were selected because they were all Christians, some of whom had moved into the neighbourhood from other parts of the city hit by Boko Haram attacks."

Residents said they suspected the attackers were from Boko Haram.

"The attackers came in and silently went into homes whose residents were all Christians and slit the throats of their victims. They killed 15 people," one resident said.

An earlier military statement on the attack had said "unknown gunmen sneaked into Musari community ... and secretly carried out selective killings of five people including a serving Nigerian police traffic warden."

Residents said that a number of people have moved into the Musari area to flee violence in Maiduguri, which has faced incessant bombings and shootings blamed on Boko Haram.

Violence linked to Boko Haram's insurgency in northern and central Nigeria has left some 3,000 people dead since 2009, including killings by the security forces.

While Boko Haram's victims have often included Muslims, the group has also specifically targeted Christians, including bombings of churches. There have previously been instances of victims having their throats slit in attacks.

Nigerian President Goodluck Jonathan has accused the group of seeking to ignite a religious crisis in the nation of some 160 million people.

During a Christmas Eve service last week, gunmen attacked a church in northeastern Yobe state, killing six people, including the pastor, before setting the building ablaze.

Boko Haram has claimed to be fighting for the creation of an Islamic state in Nigeria, though its demands have repeatedly shifted and it is believed to include a number of factions with varying aims.

Nigeria's military has also been accused of major abuses in its response to Boko Haram's attacks, including killings of civilians and the burning of homes.

Human Rights Watch recently alleged that Nigerian security forces as well as Boko Haram may both be guilty of crimes against humanity.

Savannah Region: Calm returns after conflict at Lukula
18 minutes ago