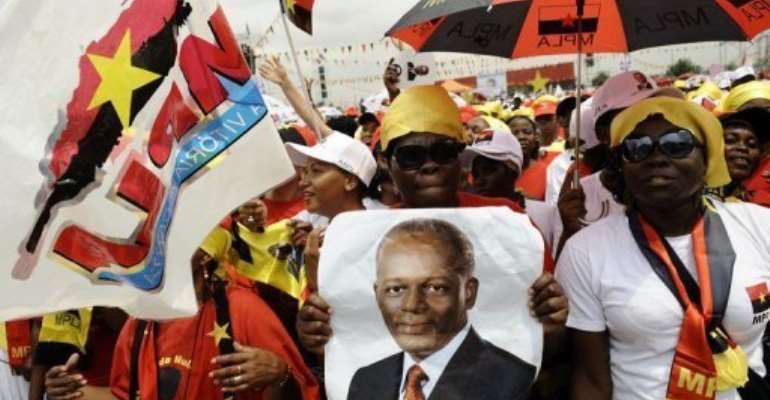 The People's Movement for the Liberation of Angola took over 80% of the vote in the last elections. By Stephane de Sakutin (AFP)

From 7:00 am (0600 GMT) voters headed to more than 10,000 schools across the country to cast ballots for parliamentarians, with the leader of the winning party set to become president.

The opposition has raised fears that the vote, only the second since the end of Angola's civil war in 2002, will not be free and fair.

Voting will close 11 hours later, with results expected to start coming in over the weekend. A final result could take around five days.

The People's Movement for the Liberation of Angola (MPLA), in power since independence from Portugal in 1975, is expected to sweep to victory which would hand Dos Santos another five years in office.

During his 33 years in power, Dos Santos has centralised power in the presidency, dominating Angolan politics and exerting a strong role in business in Africa's second-largest oil producer.

His family, notably his daughter Isabel, has built an international business empire, but has also poured billions of dollars into rebuilding the country after 41 years of armed conflict -- 14 years of liberation struggle and 27 years of civil war.

The main opposition Union for the Total Independence of Angola (Unita) battled the government until its feared leader Jonas Savimbi was killed by the army in 2002.

As an opposition party, Unita has struggled to find a base, taking only 10 percent of the vote in 2008 elections. Party leader Isaias Samakuva has campaigned mainly by calling for transparency and denouncing alleged flaws in the voter roll of 9.7 million people.

He has actively courted Angola's young voters, promising better jobs and living conditions for a nation where 55 percent of the population lives in abject poverty.