US Ambassador to Nigeria Commissions Fish Project at CRARN Centre 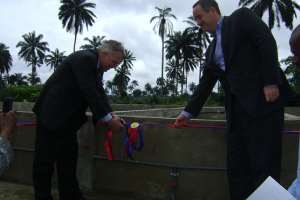 Speaking at the commissioning ceremony, Ambassador McCully stated that the US government was prepared to support groups and organisation that work towards enhancing the quality of lives of the vulnerable and the less privileged members of the society.

"We will continue to give our support to organisations and community that pay greater attention to alleviating poverty in the midst of its community and gear up quality lives of the under privileged people, the women and mostly children who need helping hands, who crave for support and comfort.''

The Ambassador commended CRARN for paying greater attention to the underprivileged children and women who suffer torture and other forms of horrendous abuses in the hands of those who owe them a duty of protection and love. He acknowledged that his office had been following the good work of CRARN for quite a long time and found it worthy for its support; and promised to give further assistance to organization and the community.

A community leader and former Eket chapter Chairman of the defunct NPN, Apostle Okon Harry Ekpuk expressed the community's deepest appreciation to the Ambassador and his team for selecting the Eket community as one of the beneficiaries of their projects. Apostle Ekpuk averred that the fish project will go a long way in touching the lives of the ordinary people.

"His Excellency, the US Ambassador to Nigeria, let me at this moment express out profound appreciation to you and your team on behalf of the people of Eket Community and its environs and to state categorically clearly that this project is a huge one, and will so strongly touched the lives of the ordinary people of this community and beyond and we will do everything humanly possible to protect and sustain it. Our community is a humane and hospitable one, so our is culture.... '' Ekpuk said

Apostle Ekpuk who spoke glowingly of the good work of CRARN said despite daunting challenges, the organization was still working hard to save live of children. He urged CRARN to continue with its services to humanity for which he said holds abundant, nature and God's reward. "As you can see, CRARN is not only a blessing to this community, but a huge asset to world and entire human race, given its philosophy, advocacy work and humanitarian record of saving and indeed transformation of children lives and the aged ones beyond its scope of operation."

In his response, the principal attorney to CRARN, Mr Pius Madaki expressed gratitude to the Ambassador for citing a project of such magnitude at the CRARN Children Centre; and expressed the willingness of the organisation to train the community to replicate it in various communities. He said the fish project will no doubt propel a lot of ordinary people to be self-reliant.

'' It is my strongest belief that this project will touch the lives of the disadvantage children, foster parents, the ordinary people and the community towards becoming self-reliant..." Madaki asserts

According to the project coordinator, Mr Akpan Umoh, the pond has four compartments ( One Nursery pond, one Transition pond and two Raising pond) which has the capacity to nursing 8000 fingerlings and raising 15000 mature catfish, was constructed and completed in July 2012 with support from US government

He maintained that the organization would not loss focus in its quest to enlighten the society on. mental reconstruction, superstition and witchcraft belief; rescuing and rehabilitation of stigmatized children.

AMBASSADOR TERENCE MCCURRY AND HIS TEAM AT CRARN CENTRE EKET

AMBASSADOR TERENCE MCCURRY AND HIS TEAM BEING WELCOMED AT THE CRARN CENTRE EKET.

BARR PIUS MADAKI-CRARN ATTORNEY ADDRESSING THE US AMBASSADOR TO NIGERIA