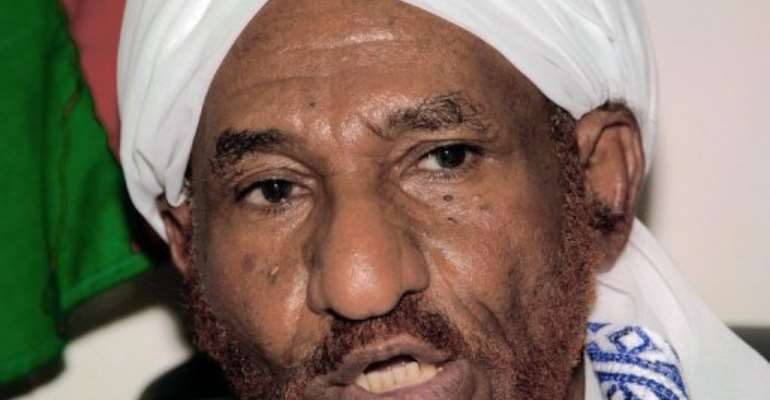 Former prime minister Sadiq al-Mahdi said Sudan and South Sudan have no choice but to cooperate. By Ashraf Shazly (AFP/File)

Kiir, denying that his country backs cross-border insurgents, made the comments at the opening of a summit aimed at averting a shutdown of the oil pipelines which are vital to both stricken economies.

"These two countries cannot always remain on a war footing. If they do that, they cannot offer services to their citizens," Kiir told a joint session attended by his Sudanese counterpart Omar al-Bashir and several cabinet members from each side.

Sudan has threatened to close from Friday the lines carrying landlocked South Sudan's oil exports -- virtually its only source of foreign revenue.

Analysts expected Bashir would use the oil issue to try to win concessions from the South on matters including its alleged support for rebels in the north.

Observers say that, despite denials, both governments have aided insurgents on neighbouring soil.

"We are not supporting the rebels, and this can be seen in reality," Kiir said.

"We have to close the old chapters and open a new page," he said. "What we agreed in September has to be the end of all conflict."

In March, the two countries began implementing nine deals which they signed in September last year but had failed to put into effect because of Khartoum's concerns over border security.

The agreements included a demilitarised buffer zone along the disputed and undemarcated boundary.

The pacts also led to a resumption of oil flows between the north and South, which pays fees to Khartoum for using its pipelines.

Sudan would potentially earn billions of dollars from those payments, while billions more would reach Juba's treasury from the crude exports.

There was also agreement on the free flow of people and goods across the international frontier.

Just as the up-and-down relations between Sudan and South Sudan appeared to be improving, the Sudan Revolutionary Front rebel alliance widened its offensive.

Khartoum then froze the nine security and economic pacts in June, and threatened to shut the oil pipelines although the deadline has been extended twice.

"We are now taking new steps," Bashir told the summit, adding that his country is committed to good relations.

"We respect all the agreements... and are committed to implementing them as one package," he said.

Bashir greeted Kiir on the Khartoum airport tarmac after he arrived on a Kenya Airways flight, wearing his trademark cowboy hat.

"Sure, it is not enough to discuss all the outstanding issues but it will solve some of them and it shows the goodwill of the two countries," he said.

El Shafie Mohammed El Makki, a specialist in international relations at the University of Khartoum, said the timing of Kiir's trip was linked to Friday's oil deadline.

"If he didn't come, maybe they are going to shut down," he told AFP.

Bashir would seek concessions in return, Makki said, including a halt to South Sudan's alleged backing for the Sudan Revolutionary Front, an alliance of rebels from the Darfur region, South Kordofan and Blue Nile states.

"They will try to bargain," he said of the two presidents.

Both leaders touched on the flashpoint Abyei region, whose status remains unresolved.

Sudan and South Sudan did not meet deadlines which they agreed in March to set up Abyei's administrative structure, including a police service.

The African Union proposed an October referendum to decide whether the territory belongs to the north or south, but Sudan disputes the suggested eligibility criteria for the ballot.

Senior UN officials from Sudan and South Sudan jointly appealed for both governments to enable "the safe and voluntary return" of people from one country to the other.

Kiir last visited Khartoum in October 2011, a few months after his country became independent from Sudan under a peace deal which ended a 23-year civil war.