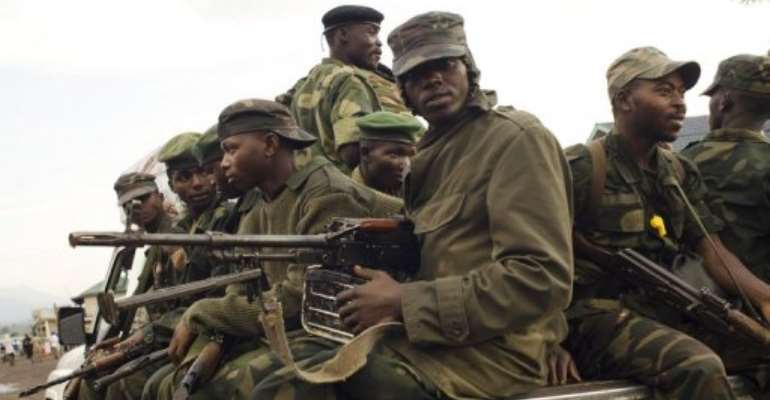 DR Congo says Rwanda is arming the M-23 mutiny which has battled regular forces since May. By Michele Sibiloni (AFP/File)

KAMPALA (AFP) - The presidents of Rwanda and DR Congo prepared for regional talks in Uganda on Tuesday to agree on a neutral force tasked with policing their border and neutralising rebel groups.

Ugandan President Yoweri Museveni is hosting the two-day summit of the 11-member International Conference on the Great Lakes Region (ICGLR), aimed to defuse mounting tensions between Rwanda and DR Congo, who have traded accusations of supporting each other's rebels.

Five heads of state are expected to attend the meeting, held at a lakeside resort outside Kampala, including Rwanda's Paul Kagame and his DR Congo counterpart Joseph Kabila.

Presidents Pierre Nkurunziza of Burundi and Jakaya Kikwete of Tanzania will also attend, with other states expected to send their vice-president or minister to attend.

The UN will be represented by Abou Moussa, special representative for Central Africa, the organisers of the summit said.

Kinshasa charges that Rwanda is arming the M-23 mutiny which has battled regular forces in the eastern DR Congo since May, while Kigali accuses its neighbour of plotting attacks with Rwandan Hutu rebels based in the same region.

A UN report published in June said there was ample evidence that Kigali was actively involved in the M-23 rebellion, led by a renegade Congolese general who is wanted by the International Criminal Court for crimes against humanity.

Experts say the latest turmoil is the result of an ongoing battle for control of the mineral-rich region, in which Rwanda has long been accused of maintaining a stake by using Congolese militias as proxies.

Rwandan President Paul Kagame told AFP in mid-July that both sides had agreed "in principle" to accept a neutral force.

A meeting of regional defence ministers held in Khartoum last week was supposed to hammer out some of the details of the force, as Kigali and Kinshasa hold divergent views of which troops would be neutral.

Kigali, while it has not issued any outright public refusal of MONUSCO, argues that the UN force is anything but neutral.

Regional foreign ministers who held preparatory meetings behind closed doors on Monday discussed at least three types of force, according to documents available at the venue.

One option would see the region's states contribute troops and funds. The African Union has said it is ready to contribute to such a force.

A second option is "an international and regional force incorporated into MONUSCO", including a beefed up mandate as MONUSCO's current mandate is limited to the protection of civilians.

A third idea is an "interim MONUSCO force" but the document did not specify if this would be in addition to the "international and regional force."

Even if a compromise is reached, the troops still need to be capable of routing some of the most battle-hardened fighters in the region, be it the M-23 or the Rwandan FDLR rebels.