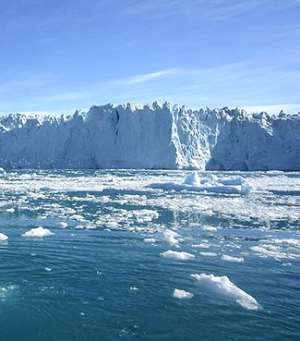 (Madison, WI) - Nearly the entire massive ice sheet that blankets Greenland suddenly started melting this month, even its coldest places. In just a few days, the amount of thawed ice sheet surface skyrocketed from 40 percent to 97 percent. This continues the shocking heating and melting of the Arctic, which is severely impacting the Northern hemisphere's weather – including contributing to America's dramatic drought and heat wave - through changes in the jet and gulf streams.

According to a NASA press release [1] – which includes a stunning satellite interpretation of the melt –about half of Greenland's surface ice sheet naturally melts during an average summer. But data from three independent satellites this July showed that in that on July 8, about 40 percent of the ice sheet had undergone thawing at or near the surface. In just a few days, the melting dramatically accelerated and an estimated 97 percent of the ice sheet surface had thawed by July 12. Carbon pollution thresholds appear to have been reached whereby the Greenland ice sheet will begin to fully melt, raising sea levels by as much as 7 meters.

"We welcome NASA's ability to monitor the Arctic, yet statements there is no cause for concern are just ridiculous. I don't accept this is a natural cycle; it is too coincident with Arctic sea ice melt, and what is happening to the Arctic in general. When the entire Greenland ice sheet's surface melts in a few days, abrupt climate change has arrived, global ecosystem collapse has markedly intensified, and the human family clearly faces a global ecological emergency," states Ecological Internet's President and global ecological sustainability expert, Dr. Glen Barry.

Arctic melting – and continental heat waves and other instances of extreme weather – are entirely consistent with decades of scientific predictions regarding anticipated impacts of climate change. What is so alarming is the speed and intensity of the observed abrupt climate change. Sudden accelerated melting of Greenland ice sheet is a game changer, clearly showing abrupt climate change has become apocalyptic and exceeds all expectations.

Ecological Internet is profoundly concerned with self-evident impacts of this human-caused ecological collapse upon food, water, and other aspects of human and all life's habitat.

On the basis of this sudden major Greenland ice melt - and other evidence of abrupt climate change globally emerging daily, including America's drought - Ecological Internet reiterates our declaration of a planetary ecological emergency. We call for all defensive ecological policy measures to be taken - by willing governments and through global people power - commensurate with the degree of threat posed to continued human well-being, and even our existence, by collapsing ecosystems.

"We ignore such evidence of potentially apocalyptic abrupt climate change and global ecological collapse at our peril. The Greenland ice sheet melting in a few days is shocking evidence of a global ecological emergency, and clearly highlights the urgency of immediately reducing greenhouse gas emissions, destruction of intact ecosystems, and growth in economies, consumption and population. The age of destroying ecosystems for resources must end, as we embrace ecological protection and restoration as society's central organizing principles." declares Dr. Barry.

### MORE ###
Ecological Internet's first declaration [2] was based upon scientific findings in “Planetary Boundaries: A Safe Operating Space for Humanity,” published in 2009 in the journal Ecology and Society [3]. Humanity was found to have already overstepped three of nine planetary boundaries – biodiversity loss, climate change and the nitrogen cycle – and to be approaching boundaries for the use of fresh water and land, and ocean acidification.

Earlier this year, the warning was renewed in support of leading international Earth scientists' findings that we face a perfect storm of ecological and social problems driven by overpopulation, over-consumption and environmentally damaging technologies. In a paper prepared for the Rio+ 20 Earth Summit to be held in Rio de Janeiro in June, they also noted the failures of the economic “perpetual growth myth” and called for “dramatic action to avert a collapse of civilization” [4].