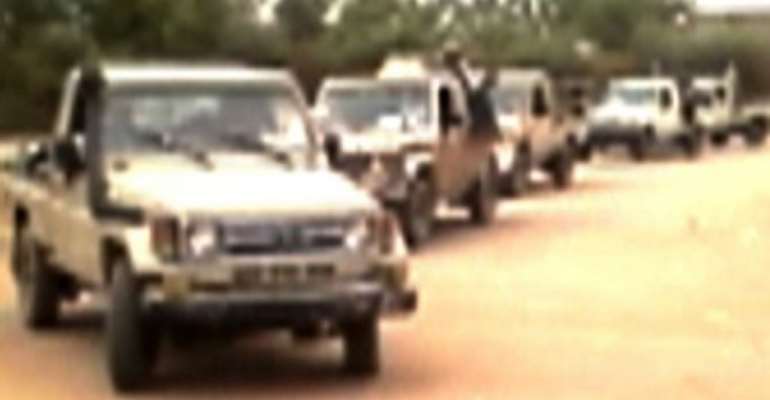 Rebels won't say if they received a ransom for three hostages they released. By Str (AFP)

BAMAKO (AFP) - An Islamist rebel group in northern Mali said Thursday it had freed three of seven Algerian diplomats kidnapped during the takeover of the city of Gao in April.

"We eventually agreed to free three of the seven hostages with us," said Adnan Abu Walid Sahraoui, spokesman for the Movement of Oneness and Jihad in West Africa (MUJAO), without specifying when they were released.

Sahraoui would not say if a ransom had been paid for the release of the prisoners which comes a week after the local Al-Qaeda splinter group announced a breakdown in negotiations with Algeria.

MUJAO first emerged in December, presenting themselves as an offshoot of Al-Qaeda in the Islamic Maghreb (AQIM) and claiming the abduction of three aid workers -- two Spanish and an Italian -- from Tindouf, Algeria.

MUJAO is demanding the release of two Sahrawis arrested by Mauritania for their role in the kidnapping, as well as 30 million euros ($40 million).

When the Algerian consul was kidnapped along with his colleagues, MUJAO claimed responsibility, demanding 15 million euros for their release.

At the end of April the group announced talks with Algiers had broken down and on May 8 they announced a 30-day ultimatum.

MUJAO, along with AQIM, have allied with Islamist group Ansar Dine (Defenders of Faith), who occupied a large part of northern Mali along with Tuareg rebels in March after a coup in Bamako.

However the Tuareg have since been pushed out of all key positions by the Islamists.

Aside from the hostages held by MUJAO, AQIM is holding six French citizens kidnapped from Niger and Mali.