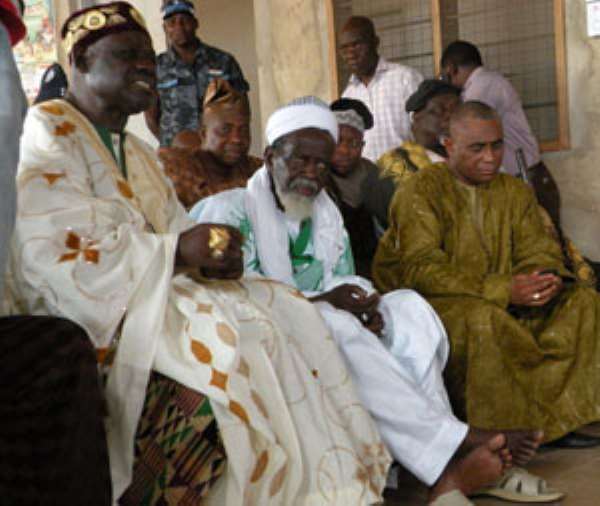 There is uneasy calm in the Hohoe municipality as a result of the dawn-to-dusk curfew imposed on the area, with the national Chief Imam, Sheik Osman Nuhu Shaributu, visiting the conflict zone and appealing for peace.

Three persons have been confirmed dead, while several people were injured in the rampage that ensued between the Zongo community and the natives of Gbi traditional area in Hohoe last Monday.

According to a police source, four persons were sent to the Hohoe Municipal Hospital, but three died while one survived. The source identified the dead as Bright Soglo, 14, Mawsusi Buta, 26, and Osman Abdulai, 58.

Bright was shot behind the head, Mawusi in the thigh while Osman was shot in the forehead.

The crisis erupted following the exhumation of the remains of the local Chief Imam, Alhassan Saani, under the alleged instructions of the paramount chief of the area.

When DAILY GUIDE visited the scene yesterday, affected persons had come to their shops to assess their losses while scrap dealers were busily scavenging the debris.

The Hohoe Municipal Hospital, which was slightly affected by the clashes, was somewhat deserted by staff and patients.

Many of the staff were in plain clothes and the Out Patient Department (OPD) was empty and doors to the offices locked. The Matron of the Hospital, Patricia Azumatse, dispelled the notion that they had deserted the hospital, noting that many of the personnel had been gripped with fear, hence the low attendance.

Madam Azumatse dispelled claims that some Cuban doctors had been assaulted.

She said two of them and four others in surrounding communities had been relocated to safety by their head office.

Burnt shops. Inset: One of the cars of Togbega Gabusu

A delegation of Muslim personalities, led by the National Chief Imam, Sheik Osman Nuhu Shaributu, and the Regional Security Council (REGSEC) led by its Chairman and Regional Minister, Henry Ford Kame, together with their entourage, met the Gbi Traditional council.

At the meeting, both sides called for calm.
Togbega Gabusu, who was initially reported to be absent from the meeting, later joined them, supported by his divisional chiefs.

Togbe Keh the XII, the Miasifia (Benkum Hene) and Chief of Wegbe expressed disgust at the action of the Zongo youth and expressed shock that despite the long standing peace between them, they (Zongo community) could attack their Paramount chief.

He wondered what would have happened to the Paramount Chief if he had been in the house during the attack.

He expressed concern about the attitude of the police, saying they had all the indications and opportunity to stop the attack and make some arrests, yet they failed to live up to expectation.

Another Chief, Togbe Adzima, also wondered why the Muslims would take advantage of their religion to flout the curfew imposed on the area.

He said as early as 4:00am, the Muslims woke up and went to their mosques to pray, disturbing the municipality contrary to the 6:00am-to-6:00pm curfew.

He wondered why the security could not stop them since they were all observing the curfew. He also alleged that during the clashes last Monday, a son of Gbi was shot dead by the police without any provocation whatsoever.

He quizzed why the police who perpetuated the act had still not been arrested.

The National Chief Imam, Sheik Shaributu, commended the Gbi people for their longstanding peaceful co-existence with the Zongo community and appealed to them for calm.

Mr Kamel appealed to the Gbi Traditional Council to exercise restraint and allow peace to prevail.

Mr. Kamel also assured the chiefs that the President was concerned about the incident and that government was committed to taking up some of the losses.

He also assured them of an independent committee to ensure that all those who failed to act responsibly were dealt with.

As the deliberations were ongoing, the youth of the town were chanting 'No more Zongo' and it took some of the chiefs to calm them down.