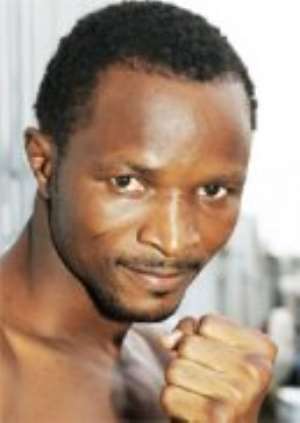 Joseph Agbeko - Wants match billed for May 26 re-scheduled The much awaited International Boxing Organisation (IBO) title fight between Ghana's Joseph Agbeko and Michael Domingo of Philippines, on Saturday, May 26 may not materialise after all.

This is due to disagreements between the Ghanaian boxer and the match promoters, Golden Mike Boxing Syndicate/Golden Concept Boxing Promotions.

Information gathered by GNA Sports reveals that Agbeko made a formal request to the organisers to re-schedule the fight but his request was declined due to expected uncertainties of the weather in June and July.

This according to the information resulted in disagreement compelling the organisers to consider canceling the fight despite making some financial commitments to the Ghanaian as well as making adequate progress in the general organisation of the fight.

From all indications the fight may never come as the organizers seem to be in no mood to make further commitments to the bout.

Checks from the camp of Agbeko by the GNA Sports, however, denied knowledge of any cancellation since they have not been notified of any change of date.

Ebenezer Noi, Public Relations Officer (PRO) of the former International Boxing Federation (IBF) Bantamweight Champion admitted there are difficulties regarding the fight but added that they have lodged an official complaint to the Ghana Boxing Authority (GBA) for redress.

He said “so far as we are concerned the fight is coming on. We did not request rescheduling. It is only the promoter who can cancel the fight but we have not been notified of any decision”.

Noi said that both parties will see their way clear after a meeting with the GBA on Friday, May 11.

The bill dubbed: “Now or Never”, would have been the first time a world title fight will be staged in Ghana since the legendary Azumah Nelson beat Brazilian Sidnei Dal Rovere on December 10, 1988 at the Accra Sports Stadium.