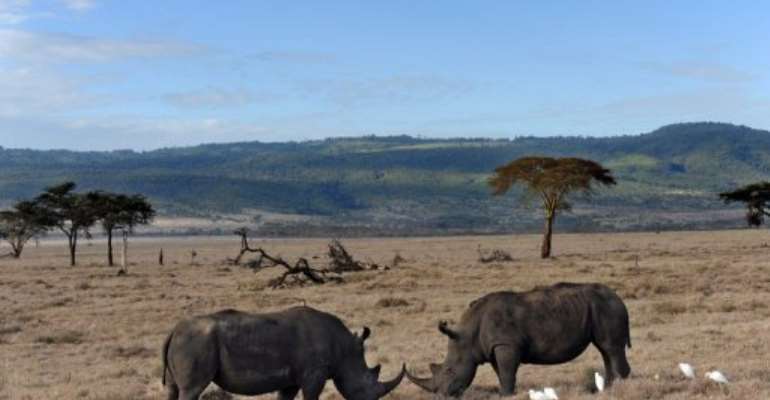 NAIROBI (AFP) - Claus Mortensen is a private Kenyan rancher with a passion -- endangered rhinos -- and now a mission: to save his herd from slaughter by ruthless poachers who sell their horns to Asia, where they are prized as a miracle drug.

But costs are spiralling for Mortensen and other ranchers as they battle to keep one step ahead of the hunters and guarantee the survival of rhinos, and elephants, on their expansive, remote reserves.

"Mugie is located in such a remote corner that to secure it we need many more helicopters and airplanes," he said.

Twenty rhinos were reintroduced to the 18,000-hectare (44,000-acre) sanctuary in 2004. Four years later, poachers struck, killing one animal and hacking off its horns.

"It happened again and again," said Mortensen, explaining that his and other ranchers' work has changed from basic conservation to intelligence gathering operations aimed at deterring poachers.

And the change has pushed up bills: private ranchers have had to triple the number of rangers working their reserves and it now costs an average $1,200 (900 euros) a month, up from $150, to keep one rhino alive.

"All night, all day... you have your telephone on, radio on, next to your bed and when somebody calls your heart stops beating," Mortensen said.

Kenya, which has the world's third largest rhino population -- around 600 black and 300 white rhinos, is constantly battling poachers. In 2009, it suffered its worst year for rhino poaching when 12 black and six white rhinos were killed.

The illegal trade is driven by the voracious Asian and Middle Eastern demand for the animals' horns for use in traditional medicines for fevers, convulsions and as an aphrodisiac.

The horns mainly contain keratin -- a substance also found in animal hooves, human nails and hair -- and despite having no medicinal value, demand continues to rise.

"The increase, escalation of poaching is driven by the growing influence of the Asian economy. There is a legal market for illegal horns," said Patrick Bergin, the director of the Washington-based African Wildlife Foundation (AWF).

"It is a complex phenomenon. Poachers are from international gangs and have sophisticated arms -- and they are ready to do anything," said Patrick Omondi of the state-run Kenya Wildlife Service (KWS).

The KWS has transferred 11 of Mugie's rhinos to a park near the shores of Lake Victoria, and will relocate the rest to another more secure private ranch.

Poachers have also hit Kenya's renowned rhino sanctuaries in Laikipia, on the equator in the foothills of snowcapped Mount Kenya.

According to the British-based conservation charity Save the Rhino, the area has the largest population of rhinos in East and Central Africa, with 49 percent of Kenya's black rhino population and 70 percent of its white rhinos, but resources at the area's sanctuaries have been stretched fending off the marauding gangs.

"Private sanctuaries do not have enough money. They cannot afford to protect the rhinos," said Mordecai Ogadam of the Laikipia Wildlife Forum.

Between 2007 and 2011, Kenya lost 75 rhinos and so far this year, 12 have been killed, according to Kenya wildlife officials.

Authorities have arrested several suspected poachers and confiscated weapons and traps, but their efforts do not seem to deter the gunmen.

Despite a ban on rhino horn trade by the Convention on International Trade in Endangered Species, which took effect in 1975 and now has 175 members including Kenya, the world rhino population has almost been wiped out, with 90 percent lost since the 1970s, according to the AWF.