Government Launches Book On Its Achievements So Far 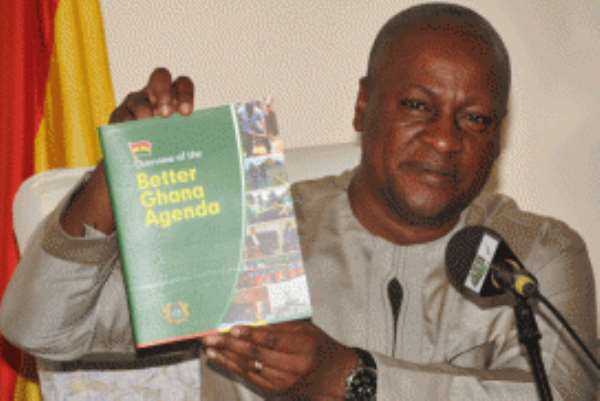 Vice-President John Dramani has launched a book on the overview of the Better Ghana agenda, expressing strong conviction that the unprecedented record of achievements of the government will make Ghanaians retain the Mills administration.

He said the book would contribute immensely to remove the scales from the eyes of those who did not seem to appreciate the marvelous achievements of the government.

The 87-page publication, which is in two parts, contains an overview of what the Mills administration has achieved in the first three years, as well as a pictorial compilation of some of the projects undertaken at the regional, metropolitan, municipal and district levels.

Highlights of the achievements include GDP growth, the highest in the nation’s history, recorded under the Mills administration, international reserves of $4.98 billion, the $3-billion loan facility from the Chinese Development Bank (CDB), the 66,000 free computers and laptops distributed to students and schools and the massive retooling of the Ghana Armed Forces.

Others are the 127 new fire engines and other fire-fighting equipment procured for the Ghana National Fire Service, the successful implementation of the mobile number portability, making Ghana the first country in West Africa to do so, and the establishment of a shea nut processing factory at Buipe.

Mr Mahama said besides the fact that the book is an excellent communication publication, it also served as an instrument for transparency and accountability to the people.

“Often, people regard what is in their locality as an achievement. It is necessary, therefore, for the government to let the Ghanaian generality know the overview of what the government has been doing across the country,” he said.

He said with the launch of the book, accompanied by real images, the cynics might now review their stance and acknowledge that the Mills administration was on track and in the right direction towards improving the lives of Ghanaians.

The Vice-President recalled the initial hiccups when the Mills administration took power and the foundation laid so far to attain the objective of a transformed industrialised nation.

He said Ghana’s wage bill had more than doubled in the last three years from approximately GH¢2 billion to more than GH¢5 billion, an indication that more money had been put in the pockets of Ghanaian workers who were better off now than they were.

On education, the Vice-President said the Mills administration would not follow the NPP’s mantra on free senior high school (SHS) education. Rather, theâ€ˆgovernment would build 200 more schools at a cost of $250 million to expand access for children who could not find space now.

In a welcoming address, the Minister of Information, Mr Fritz Baffour, said the government was on course in its four thematic areas of building a strong and resilience economy, infrastructure, investing in people and transparent and accountable governance.

He said the book was an attestation of the determination of the government to create awareness of its achievements and expressed the hope that people would appreciate its contents.

A Deputy Minister of Information, Mr Samuel Okudzeto Ablakwa, said the book, which was user-friendly, contained concrete facts on the achievements of the government.

Speaking on a strong economy for real jobs, a Deputy Minister of Finance and Economic Planning, Mr Seth Terkpey, said the economy, which hitherto had high inflation and budget deficit, a depreciating cedi and depleting gross international reserves, had been totally turned around.

He said the macroeconomic indices attested to that feat. with several indicators showing fantastic results never achieved in Ghana’s history.

The Deputy Minister of Sports, Dr Edward Omane Boamah, said President Mills remained the “calcium in the backbone of the NDC administration”.

He said under the Mills administration, 66,000 free computers and laptops had been distributed to students and schools, while electricity coverage had been increased from 54 per cent to 72 per cent nation-wide in three years.