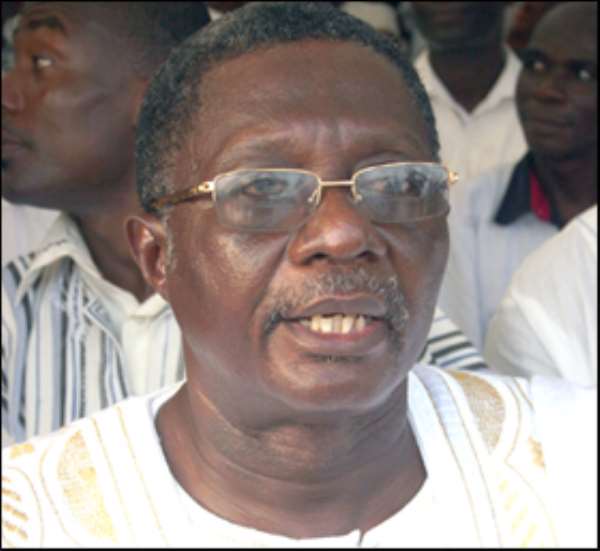 One of the highlights of the biometric registration exercise in Accra was the arrest of the immediate past Greater Accra Regional Minister, Nii Armah Ashietey, at the Police Motor Transport and Traffic Unit (MTTU) headquarters registration centre in Accra on the eve of Good Friday.

He was bundled to the counter-back with beads of perspiration visible on his forehead and other parts of the body.

The former minister however downplayed the incident, saying, 'I won't call it a detention because he asked me to go to the counter-back and I said no!'

The former regional minister was arrested upon the orders of ACP Awuni Angwubutoge, the Commanding Officer of the unit, who DAILY GUIDE learnt, had received a myriad of threatening text messages from the Castle for his seeming effrontery.

When DAILY GUIDE called the superior police officer for comments, all he said was: 'I did my work, no comment'.

According to a New Patriotic Party (NPP) agent who spoke to DAILY GUIDE on anonymity, 'The NPP Parliamentary Candidate for the Korley Klotey constituency, Nii Adjei Tawiah, called my attention to a problem at the registration centre situated within the MTTU Yard between 9.30 and 10 am on Thursday.'

'When I got there, I saw the former Greater Accra Minister telling the EC officials that those who were not resident in the area should not be allowed to register- a situation which had stalled the exercise.

'I told the EC officials that they should go ahead with their work because the law states that people who mostly stay in a location because of their work are by law entitled to register and vote at the location. I cited the case of some policemen who although did not live at the barracks, work at the place and could therefore register and vote there accordingly. I added that if there was any disagreement the challenge form should be completed,' he said.

Since both parties- that is the former regional minister and his challenger from the NPP- did not agree with each other and continued to argue, the emanating noise became unbearable for the MTTU personnel who intervened, according to the NPP agent.

'Hon Nii Armah Ashietey continued with his insistence even after the policemen asked that we go to the EC's offices to sort things out,' he went on.

At this stage, the Commanding Officer was said to have chanced upon the scene, and demanded that normalcy be restored so the registration could go on.

'The NDC candidate said he won't leave the place upon the orders of ACP Awuni who in reaction ordered his men to arrest him and confine him behind the charge office counter,' he said.

The former Regional Minister, in his reaction, said that he was at the scene to perform his role as the Member of Parliament for the area when he discovered an anomalous situation of hawkers crossing from the other side of the road in front of the MTTU to register at the place. That, according to him, suggested that they were leaving the Odododiodoo constituency to register in Korley Klotey, which he said he would not allow.

'I was doing my parliamentary duties by finding out what was happening. At the MTTU, I discovered people coming from the other side of the road- that is Okaishie- to register and it was alarming and we share a common border with Odododiodoo constituency,' he said.

He described the interpretation of the electoral law regarding registration as funny.

'It is the EC which made the law and they should understand it better,' he said frustratingly.

'I called Mr. Adolf Lokko, an EC supervisor, who said he was coming. The EC officials stopped at this stage. I did not stop them,' he said.

When ACP Awuni appeared on the scene, 'he said I was disrupting the exercise which I did not understand because I was doing my parliamentary work', the ex-minister noted.

According to him, 'Awuni ordered six of his men to push me to the ground. They brutalized me. Two months ago, Awuni was saluting me, today he has asked his men to brutalise me. That is Ghana. I worked for three years as minister and that is my treatment.'

He said he had made a report to the IGP, adding, 'I am preparing a report to give to the National Security apparatus.'

Continuing, he said the registration centre had been moved out of the MTTU Yard, a suggestion according to him, that it was not supposed to be where it was in the first place.

He said as this was going on, Ursula Owusu, the NPP parliamentary candidate for Ablekuma South, was encouraging people to come and register in the Korley Klotey constituency.