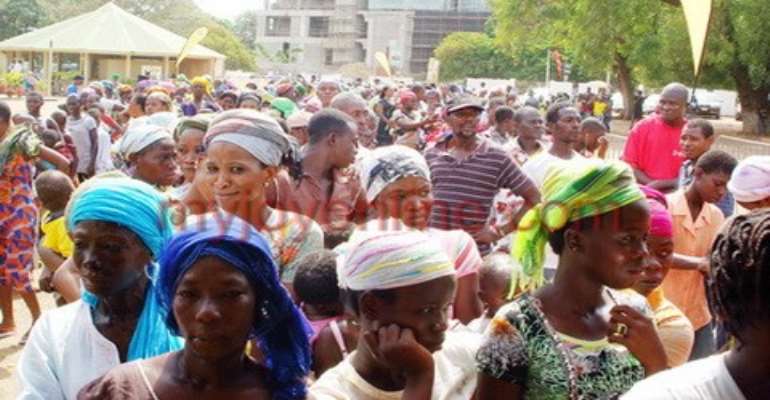 The need for peace and tolerance in this year's general election dominated most sermons in churches, when believers started the Easter Triduum with services from Good Friday through Holy Saturday till Sunday to commemorate the death and resurrection of Jesus Christ, the fountain of the Christian religion.

While most Christians wore white apparel for church services on Sunday, it was preceded by the wearing of black clothes for Good Friday services.

Most Christians from the Orthodox churches marked Good Friday with observation of the passion of Christ services through Saturday when new converts were baptised and capped with Resurrection Church Services during which most of them were clad in white apparel to signify the victory of light over darkness.

From the Martyrs of Uganda Catholic Church, Mamprobi, that Rev. Fr. Christopher Sackey, urged Christians to be instruments of peace in this year's general elections.

He said it was unfortunate that even with the biometric registration exercise, Ghanaians were beating each other and wondered what would happen on election day itself.

He reminded Ghanaians that they had only one country and indicated that finding oneself in another country as a result of electoral violence would mean that Ghanaians would be deprived of their beautiful nation.

Rev. Fr. Sackey, therefore, urged Ghanaians to maintain the peace and harmony they currently enjoyed so that the country would remain peaceful after the elections.

Touching on the essence of the resurrection of Jesus Christ, he wondered if Christians would continue in the light of the risen Christ or go back to the bad lifestyles they led before Easter.

“Let the power of the resurrection take away envy, greed, corruption and all the bad things that was associated with us before Christ died and rose for our sake so that His resurrection will be proclaimed by the lives we lead”, he said.

Preaching the sermon at the Osu St Peter's Catholic Church where 30 new believers were baptised into the Catholic Church and 60 others received first Communion, the parish priest, Rev. Fr. Dominic Amegashiti, noted that the resurrection of Christ meant that darkness had been conquered forever and, therefore, urged Christians to let Christ live in their hearts and minds.

He explained that the joy of Easter was peace, hence the need for Christians not to only live in peace but let the peace of Christ manifest in their lives, particularly towards their neighbours.

In his sermon on Good Friday, Rev. Ernest N. A. Aryeetey of the Rev Henry Wharton Methodist Church in Accra, admonished Christians to live in humility.

He said the death of Christ was a sacrificial act that was accomplished in humility for a good purpose.

Rev. Aryeetey explained that Jesus Christ had the authority and power which he could have implored to prevent him from the pain he went through before his death, but he chose not to “show off” this power.

He called on the congregation to serve the church well in whatever capacity they were called upon to do as that would not only help the growth of the church, but would in turn help in the spiritual benefits to the congregation.

Kwame Asare Boadu reports that churches in Kumasi were filled to capacity today as Christians marked Easter Sunday, the resurrection of Jesus Christ.

At the St. Cyprian's Anglican Cathedral, the Anglican Bishop of Kumasi, Rt. Rev. Dr. Daniel Yinkah Sarfo, led the congregation in prayer for the renewal of faith and social change expected in the country.

Touching on the December general elections, he called on citizens of voting age to register in their numbers and vote for God fearing people on election day.

Emphasising that the resurrection was the cornerstone of the Christian hope, the Bishop said, “ Let our lives show that we are indeed followers of Christ.”

He called for tolerance for one other's views to ensure that the nation progressed on a united front.

Preaching the sermon at the Arch Cathedral of the Action Chapel at Abrepo, the resident pastor, Rev. James Nana Ofori-Atta, urged Christians and indeed all Ghanaians to cultivate the spirit of forgiveness.

He stated that the main reason why Christ died for mankind and later rose from the dead was for God to forgive “us our sins.”

Quoting extensively from he scriptures, Rev. Ofori-Atta said “If you cannot forgive one of his sins God will also not forgive you your sins.”

He used the occasion to advise politicians to ensure a protected Ghana before, during and after the December general election.

From the Mount Olivet Methodist Church at Dansoman, a massive congregation of Christians who thronged the church to celebrate the resurrection of Christ.

Clad mostly in white apparels, the congregants waved white handkerchiefs as they danced to melodious tunes provided by both the resident church choir and the Olivet Voices which sang both local and international gospel tunes.

In a sermon, the Very Reverend George Mensah, the superintendent Minister asked Christians to have strong faith in the Lord in all their dealings to ensure success.

“Whether in the reading of the Bible or in your marital life or at your work place, have faith that it shall come to pass and the will of God will be done”, he advised.

The Bishop of the Lighthouse chapel, Bishop Dag Heward Mills in his Easter message said it was imperative for Christians to acknowledge and appreciate the sacrificial death of Christ on the cross for mankind.

Quoting from Deuteronomy 21 onwards, he said it was imperative for Christians who had given their lives to Christ to stop murmuring, be obedient to their superiors, avoid immorality and stop idolatory.

Bishop Heward Mills affirmed that Jesus Christ was divine and different in that he was able to heal the sick and perform a lot of signs and wonders.

Chastity, he said, was supposed to be the attitude of every true Christian.