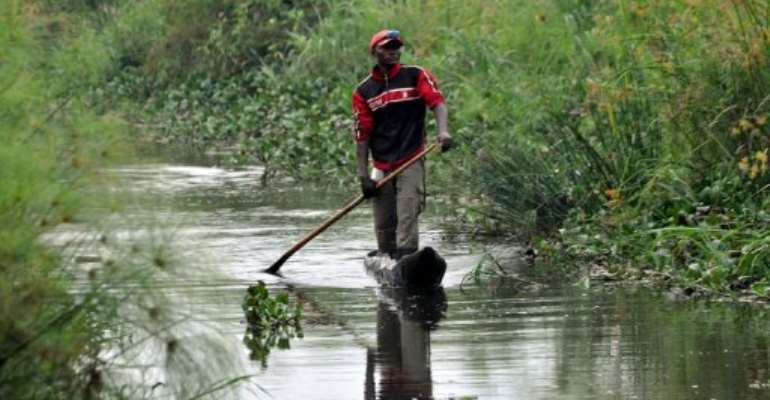 Ntibaziyandemye wears his rechargeable LED light as he heads out before dusk. By Steve Terrill (AFP/File)

BUGESERA DISTRICT, Rwanda (AFP) - The lights Daniel Ntibaziyandemye uses for his nocturnal fishing trips are charged by pedal-powered generators that offer an affordable means of creating energy, even for the poor.

The small generator, which stands knee-high inside a wooden frame, is operated by what looks like a recumbent exercise bike and charges batteries for small but bright light-emitting diode (LED) lamps. The light created is cheaper and more efficient than solar power.

"Previously we used torches to find our traps at night," said Ntibaziyandemye, aged 28, who fishes at night on the remote crocodile-infested Akanyaru river.

"But the batteries were so expensive that it left us with little profit. Now with the new LED lights, we can fish for a week for less money than it used to cost for one night."

He lays his traps just before dusk among heavy brush, waving away mosquitoes and listening out for crocodiles, waiting until night to venture into the water to collect his catch.

Five lights can be recharged with 20 minutes of pedalling and each light lasts more than 25 hours -- enough for a week for most users. One minute spent pedalling generates almost 400 minutes of light.

The company gives the generators and lights to small traders, allowing them to pay for them later, in instalments, with the money they make from the equipment. Villagers then pay a small fee to the traders to have the lights charged every week.

"The company gave me gave me six months to repay the loan for my first lights, but with the money I made from recharging the lights, I was able to repay my loan in two months," said 25-year-old Martin Uwayezu.

"I used to be poor but now I am a businessman."

Nuru Energy has pilot projects in other countries, including India, but Rwanda is the first African country where it has launched the pedal-powered generators.

To reach its customers, Nuru uses the local mobile phone money transfer system, whereby traders buy credit by sending text messages and receive a code to unlock the generators and charge the lamps.

Much of Rwanda's rural areas have no electricity and people rely on kerosene and wood for lighting and cooking.

More than 90 percent of households use kerosene and exposure to the fumes can be as bad as smoking two packs of cigarettes a day.

"In addition to being dangerous, it's inefficient and costly," said Sloan Holazman, Nuru marketing director. "Households spend 10 to 25 percent of their income kerosene for light alone."

The company's CEO and co-founder Sameer Hajee said they studied energy use by rural Rwandans to come up with the cheap and clean energy technology that many can easily afford and depend on.

"Kerosene is expensive, unhealthy, environmentally unfriendly and it's unsafe. But it's also portable, reliable and affordable," he said.

Nuru has also signed an agreement with the US Bank Merrill Lynch allowing the bank to purchase credits to offset its carbon print, and injecting funds into the coffers of the Rwandan firm to expand its business.

In addition to charging LED lights, the firm also plans to expand the use of its generators to charge mobile phones and other devices in rural areas with no electricity.

The company now boasts 10,000 customers across Rwanda and hopes to expand to other east African countries, such as Kenya, Tanzania and Uganda later this year.