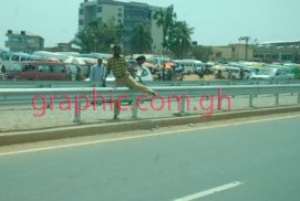 Three weeks after the George Walker Bush Highway was opened to traffic it has claimed the lives of 13 pedestrians.

Ten of the 13, according to the Police Motor Traffic and Transport Unit(MTTU), were people who sought to cross the highway from one side to the other, either to their places of abode or work or to transact one form of business or another, along the highway but were knocked down by speeding vehicles as a result of their refusal to use the six pedestrian footbridges on the 14-kilometre road.

From February 15 to March 8, this year, the police have also recorded 34 car crashes involving 52 vehicles on the same stretch.

The Director of Education at the MTTU, Assistant Superintendent of Police (ASP) Alexander Kwaku Obeng, said since the accidents, the police had increased their presence on the road and would strictly enforce the laws and ensure the use of the footbridges.

The Director of Road Safety and Environment of the Ghana Highway Authority (GHA), Mr Joe-Fred Peseo, said a detailed road safety audit was yet to be done but the defects have been identified and would be addressed in a few months.

“We will also determine new crossing points and construct new footbridges. We will introduce ramps to the footbridges to enable the disabled to access them,” he added.

But the Accra Metropolitan Authority (AMA) is of the view that it is not the construction of more footbridges that is needed but a change in the attitudes of the people.

The Public Relations Officer of the AMA, Numo Blafo III, said the six footbridges constructed were under-utilised and wondered why more should be constructed.

“People are just indisciplined and this is what we must seek to put a stop to,” he said.

He said the AMA had contracted a company to erect a wire fence along the entire road median to stop people from crossing it at unauthorised places and added that would be done by the end of the month.

Additionally, he said, special tow trucks would be positioned along the entire stretch and any vehicle which parked at an

unauthorised place would be towed to the AMA offices and the owners made to pay fines.

Numo Blafo said new footbridges would be constructed but gave the indication that it might not be immediate, adding that until then the attitude of the people must change.

The $55.7 million motorway functions as part of the larger Trans-West Africa Highway which runs from Aflao on the Ghana-Togo border to Elubo on the Ghana-Cote d’Ivoire border. It supports urban traffic movement within the Accra Metropolitan Area and is sure to improve the efficiency of the road networks in and around Accra.

It is expected to reduce the delay in accessing Accra’s international airport and the Tema Harbour. Apart from the six footbridges, the motorway includes two grade separation interchanges at the Dimples and Mallam junctions, 13 bus bays, 23 minor junctions, bicycle lanes and two transport terminals at Kokroko, near Mallam, and Abeka Lapaz.

There are more than 10 communities along the stretch, some of which are Dzorwulu, Abofu, Apenkwa, Barn Yard and Mallam and residents of these areas cross the motorway everyday.

Some argue forcefully that indiscipline was responsible for the current situation and that inadequate number of footbridges was no licence for people to cross the highway at unauthorised places endangering their own lives and the lives of other road users.

Pedestrians who spoke to the Daily Graphic agreed that it was dangerous to cross at unauthorised places but seemed to have thrown caution to the wind.

Mercy Agyeiwaa, a resident of Israel Lomnava, a suburb of Accra, was asked last Wednesday morning why she would not use the footbridge instead of crossing from one side of the road to another.

She said she found it difficult walking to a footbridge because of the distance to the nearest footbridge.

“Just look at where the footbridge is. Look at the distance between where I am standing and attempting to cross and where the

footbridge is.
Do you expect me to walk that long distance just to cross?” she asked.

Richmond Darko, a mechanic, who crossed at Dzorwulu, some metres away from the main traffic light, acknowledged that it was dangerous to cross at unauthorised places but said it was more convenient when one took into consideration the fact that where he emerged from to cross the highway was not close to any of the footbridges.

“Doesn’t the government know that people have settled all along the highway? People lived close by long before the highway was constructed. It is, therefore surprising that they did not take that into consideration in constructing more footbridges,” he said.

Kwame Nkansah, a shoe seller, standing at Abofu ready to cross to the other side, noted that he did not use the unauthorised crossings often and added that he did so only when he observed that there were not too many vehicles on the road.

“ I use the footbridge, especially in the mornings and evenings,” he said, explaining that at those periods, vehicular traffic was heavy and it would be suicidal to cross at those times.

“But in the afternoons and before the evening rush hour, the traffic eases and during those times I cross with ease,” he added.

Solomon Osei, who resides close to the Dimples area, said it was not his wish to cross at unauthorised places but the footbridge was too far away from the point he needed to cross.

One issue which kept emerging was whether it was the inadequate number of footbridges or indiscipline which was responsible for the high rate of deaths and accidents on the Bush Highway.

Major Albert Don Chebe, Public Affairs Manager of the Millennium Development Authority(MiDA), said the road was built to a particular specification but after it had been completed, its shortcomings became obvious.

But as of now, he added, every cent had been expended on the road and there was nothing left in the kitty to add any new structure.

He said the highway had been handed over to the GHA and so if it was found expedient to construct more footbridges and alter the design, it would be the responsibility of the GHA to do so.