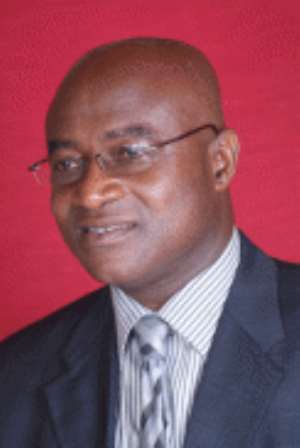 The Minority in Parliament has reacted to President J.E.A. Mills's State of the Nation Address presented to Parliament Thursday, saying the message failed to offer any hope to Ghanaians who had entrusted their future into the hands of the government.

The atmosphere in the House during the presentation depicted two contrasting pictures, as Members of Parliament (MPs) from the Majority side were dressed to show their festive mood, while their counterparts from the Minority wore black and red apparel to symbolise mourning.

The over-one-hour address was also characterised by boos, jeers, taunts and singing from the Minority side, which at certain stages made it difficult for the audience to hear the message being delivered by the President.

So intense was the heckling that President Mills had to remark at the end of his message, “Even though I knew that I would be heckled, I did not expect the heckling to be so gargantuan!”

That was when he had been shown the red card, amid the blowing of whistles and shouting, “Away! Away! Away!” by all the MPs from the Minority side who kept on singing the now popular “Woyome Woyome” tune at certain stages during the delivery of the address.

Unable to bear the intense heckling by their Minority counterparts, the backbenchers of the Majority side occasionally shouted, “Cocaine, cocaine”, and with those shouts from both sides, the President had to stop his address occasionally to allow the noise to die down before resuming.

On the President’s delivery, the Minority Spokesperson on Communications and MP for Okaikoi South, Nana Akomea, explained that Minority MPs had to wear red and black to mourn the country after the government had unjustifiably paid judgement debts running into several millions of cedis to Mr Alfred Woyome and Construction Pioneers without thinking about the plight of the poor and under-privileged in society.

Speaking to the Daily Graphic, the New Patriotic Party (NPP) MP for Okere, Mr Dan Kwaku Botwe, stated that the address did not give hope to Ghanaians.

“Through the more than three years that the NDC has been in power, the President has not been able to think outside the box to initiate programmes that will give hope to Ghanaians,” he contended.

He said the government was “bereft of ideas” and attributed what he called “the uninspiring” last State of the Nation Address to the fact that the President had little or nothing to report to Ghanaians.

Mr Botwe said it was sad that even the one-time premium payment of the National Health Insurance Scheme (NHIS) which the NDC touted during electioneering in 2008 had not been implemented at all.

“The address can best be described as ‘business as usual’. There was nothing ingenuous and it had no new idea to inspire Ghanaians,” Mr Botwe added.

The NPP MP for Kade, Mr Ofosu Asamoah, said the address did not reflect the true state of the nation, as many of the statements made by the President contradicted some earlier pronouncements made by the Minister of Finance and Economic Planning, Dr Kwabena Duffuor, in the 2012 budget.

He explained that while it was touted that the school feeding programme would cover both public and private schools, the President stated that there was going to be rationalisation, even in the public schools currently on the programme.

For his part, the NPP MP for Old Tafo, Dr Anthony Akoto Osei, said it was unfortunate for the President to single out the Ashanti Region for mention by saying that the government had no intention to encourage violence in the area.

“The statement by the President was unfortunate,” he said, adding,“I think, after reflection, the President will explain what he actually meant by what he said.”

According to him, the image of the country was gradually sinking, contrary to the manner the government was blowing its horns to “put dust into the eyes of Ghanaians about its achievements”.

Dr Akoto Osei said the Ghana Investment Promotion Centre figures that, according to the President, showed an increase in projects registered amounting to over $7 billion in foreign direct investment were not accurate reflections of the situation on the ground.

“The President’s advisors are not giving him good advice,” he said, and called on them to paint a proper picture of the state of the economy to him.

For the MP for Ahafo-Ano North, Mr Richard Akuoko Adiyiah, it was unfortunate that 2011, which had been proclaimed “Action Year” by the government turned out to be what he called “a year of massive corruption”.

“The state of the nation cannot be healthy in the midst of the payment of such huge amounts to Mr Woyome, CP and Waterville, without the government making any attempt to verify the veracity of their claims,” he said.

A former Minister of State at the Ministry of Water Resources, Works and Housing and MP for Bantama, Mrs Cecilia Dapaah, said the government owed the country’s security forces an explanation after failing to execute the STX deal to provide security personnel with accommodation.

She wondered why the affordable houses which had been started by the NPP administration had been left to rot, while Ghanaian workers needed accommodation.