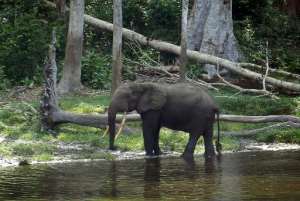 Kinshasa (AFP) - Ivory-hungry poachers have killed 30 elephants in a Congolese national park in the past two weeks, park authorities said Monday, adding that the culprits were likely Sudanese militia.

News of the Garamba National Park slaughter came as wildlife experts warned at a major summit in Botswana that elephants could become extinct with a few decades if poaching continues.

"We have a group of north Sudanese coming inside the park, spreading in small groups and during 15 days they killed 30 elephants," said Froment, whose group co-manages Garamba National Park, located in the northeast of the Democratic Republic of Congo.

Garamba is home to 1,700 elephants, according to wildlife surveys, making it a target for armed ivory poachers.

With just 150 rangers patrolling 13,000 square kilometres (8,000 square miles) of grassland and forest, it is difficult to keep the giant mammals safe.

Froment believes Sudanese militia are behind the latest killing spree. They spread into Garamba after finding the elephant population density was thinning in Central African Republic and northern Congo, he said.

In 2012, Sudanese poachers killed as many as 300 elephants in 10 weeks in Bouba N'Djida National Park, northern Cameroon.

Some of those poachers wore government uniforms and carried army identity documents.

The Ugandan rebel Lord's Resistance Army (LRA), whose ranks are infamously swelled by abducted children, have also poached in Garamba.

Ugandan troops who are meant to be hunting fugitive LRA chief Joseph Kony down, as well as members of the South Sudanese and Congolese armies, are also believed to be involved in poaching.

Last June, African Parks warned of a "poaching onslaught" in Garamba after 68 elephants were killed in just two months. Ten of them were slaughtered on a single day.

The parks authority singled out the LRA as a main culprit for that slaughter, though at least nine pachyderms were shot dead by a military helicopter.

African elephants could be extinct in the wild "within our lifetime", experts warned on Monday at the Africa Elephant Summit held in Botswana.

Elephant hunting is often organised by international criminal networks to supply the illegal ivory market, mainly in Asia, with some profits thought to fund regional conflicts and militants.

2022 Budget brouhaha: Cooperation has suffered and will cont...
50 minutes ago