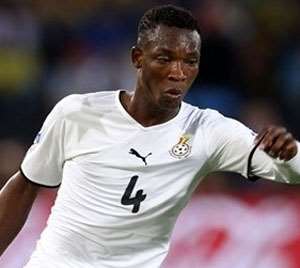 Ghana defender John Paintsil says Saturday's game against Mali is just important like any other game for the sides 2012 African Cup of Nations hopes.

A win for either side would confirm their place in the next round of the competition.

Paintsil said on Thursday 'it's a crucial game' against the Malians at the Stade de Franceville.

'It's a game that we are going to call it a do or die affair. That's the game that would qualify us to the quarterfinal.'

Both sides are level on three points after Ghana beat Botswana 1-0 in their first game while Mali also won by a similar scoreline against Guinea on Tuesday.

Ghana are tipped as one of the favourites but for Paintsil, the Black Stars are not getting too far ahead of itself as they focus just on Mali.

'It's a massive one against Mali. It wouldn't be easy but we would keep our discipline and keep our heads focused and take one at a time just like we did in the first game (game against Botswana),' he said.

'We are very confident of making it to the next round and would play to win the next one (against Mali) and see how it goes from there. The reward after every game is the same, it's three points, and that's what we are determined to get.'