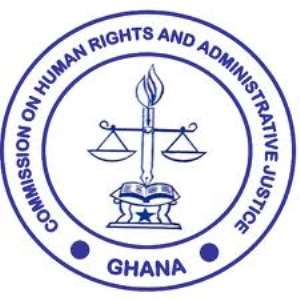 Accra, Dec. 9, GNA -The Commission on Human Rights and Administrative Justice (CHRAJ), has called on the Government to fully commit itself to building a more democratic society towards the promotion of human rights and civil liberties.

“Although Ghana has made a solid progress in building a democratic society, promoting human rights and the observance of civil liberties, the country still has a long road to travel in establishing a culture of peace and human rights”, it said.

These were contained in the 2005-2011 CHRAJ report on the state of human rights in Ghana, which was presented by the Commissioner of the body, Ms Laureta Vivian Lamptey, in Accra on Friday, to mark World Day Against Human Rights, which falls on December 10 every year.

This year's event would be observed on the theme: “Discrimination and Human Rights Defenders” and aim at promoting dialogue on state responsibility in ensuring that the rights based approach to poverty reduction, economic growth and resource allocation were employed in the planning and implementation of policies to protect the vulnerable.

Ms Lamptey said the report indicated criminal violence between Kusasis and Mamprusis, police brutalities and mob justice, police brutalities against residents of Nakpanduri, child exploitation, discrimination against women and girls, cruelty, inhuman and degrading treatment, and the plight of suspected witches in the witch-camps of Northern Ghana.

She said the report revealed that Ghana was touted as one of the best performing economies in Africa, where poverty declined from 52 per cent in 1992 to 28 per cent in 2006 and that the country was likely to reduce its poverty rate by half by 2015.

Ms Lamptey said despite the strides made towards achieving the Millennium Development Goal by 2015, poverty was practically endemic in Ghana, much work needed to be done to reduce poverty.

She said there was the need for the country to ensure the right to basic education, health and to fight against harmful cultural practices.

Ms Lamptey expressed worry that some educational institutions, especially basic schools in the rural communities, lacked adequate infrastructure and teaching and learning materials, and appealed to Government to ensure equitable distribution of basic amenities to all sections of society.

She said some children did not go to school despite the introduction of the Free Compulsory Universal Basic Education.

Ms Lamptey called on Government to expunge the law on corporal punishment from the statute books since many countries including New Zealand and Australia had realized the harmful effects and abolished it.

Ms Lamptey said the Commission has received 162,794 complaints within six years and was able to solve about 80 per cent of the cases through arbitration.

He expressed the hope that the public would continue to have confidence in the Commission in the promotion of mutual coexistence.