By Richard Ingham and Marlowe Hood 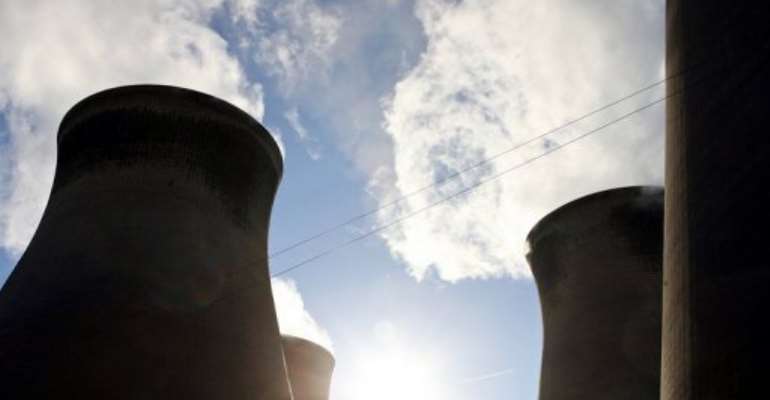 Going into the talks Kyoto the only international curb on greenhouse gases was hanging by a thread. By Paul Ellis (AFP/File)

DURBAN, South Africa (AFP) - After 12 days wrangling, UN climate talks went into extra time on Friday with China, the US and India facing pressure to back a European bid for a new worldwide pact on greenhouse gases.

A core group of ministers from around two dozen countries, representative of rich and poor countries alike, was expected to haggle into the night.

Assuming they found common ground, their compromise would be put to a plenary of the 194-nation UN Framework Convention on Climate Change (UNFCCC) on Saturday.

On the table is a European scheme claimed to be backed by nearly two-thirds of the world's nations.

They support a "roadmap" leading to an accord, to be negotiated by 2015 which for the first time would bind all nations to legal commitments to tackle greenhouse gases.

Without naming names, Hedegaard said this left the United States, China and India to declare their hand. The US and China are the world's biggest emitters.

"The success or failure of Durban depends on the small number of countries who have not yet committed to the roadmap and the meaningful content that it of course must have," said Hedegaard.

After delays that caused seething frustration, South Africa published a draft text and summoned the core group in an "indaba," the word for a traditional forum, to discuss it.

But the document was savaged by supporters of the roadmap proposal, for it lacked the key words "legally-binding" and implied the pact -- which it described as a "framework" -- would take effect only after 2020.

"We will put the world in a process to be cooked," Bolivian delegation chief, Rene Orellana, head of the left-leaning Latin American ALBA group, told reporters.

"This is the death of climate," Orellana said, who spoke in English.

"This is a non-starter," said Jennifer Morgan, director of the Climate and Energy Programme at the World Resources Institute (WRI), a US thinktank.

Karl Hood, environment minister of Grenada and current chair of a bloc of small island states, was asked if he saw "a happy ending" in Durban.

"It is difficult for us to accept that you start a new process at the end of this that will finish in 2015, and doesn't become operational until after 2020. And we looking at God knows when."

The roadmap scheme aims at filling a void at a time when scientists are urging ever more radical action to curb carbon emissions driving the planet to worsening food, drought, rising seas and storms.

The goal is to bridge the gap between the end of 2012 -- when the first round of legal-binding curbs commitments under the Kyoto Protocol expire -- and 2020, the date for which countries have made voluntary pledges on carbon reductions.

Those pledges, scientists say, fall far short of what is needed to prevent the planet from heating up by more than 2.0 degrees Celsius (3.6 degrees Fahrenheit) beyond pre-industrial levels.

Beijing has said it is not opposed to taking on legally binding commitments after 2020, but tied that offer to a long list of conditions.

US negotiators, acknowledging a difficult domestic political context, have shied away from signing on to anything with the label "legally binding."

Under the EU deal, Europe would sign up to a second round of Kyoto promises, thus satisfying developing countries that are clamouring to keep the landmark As the talks went into extra time, the environment minister of the Maldives, Mohamed Aslam, joined several hundred green activists in a protest rally that blocked the main hallway in front of the plenary.

"This is a planetary emergency -- the world needs action now -- people power, not corporate power," they chanted.