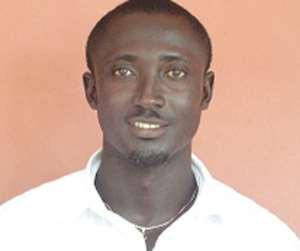 JOHN B. Mensah, the fugitive assemblyman of Kwabrafoso East Electoral Area, who allegedly defiled a 12-year-old pupil of Tutuka Methodist Primary School in Obuasi, has been finally arrested and placed in police custody, four days after going into hiding.

He was arrested around 12 noon yesterday, when he surrendered to officers at the Domestic Violence and Victim Support Unit (DOVVSU), while in the company of his colleague assembly members.

His victim, on the other hand, was at the theatre of the Komfo Anokye Teaching Hospital (KATH) at the time of his arrest and has since been operated upon.

The primary-three girl was rendered incapable to walk following her alleged abuse on two separate occasions in the suspect's room at Kwabrafoso, a suburb of Obuasi.

John B. Mensah, an operator of an information centre in Obuasi, has been accused of sexually assaulting the victim after the poor girl bought him iced sachet water, which she was sent to buy.

The girl continuously groaned in pain as a result of a bone fracture sustained in the process of the sexual intercourse that was said to have been done in different styles and positions.

The incident happened in November.
DSP Sophia Eva Ennim, the Obuasi Divisional DOVVSU Unit Commander, who earlier confirmed the alleged incident, told DAILY GUIDE that the victim was referred to the KATH for a surgery around the pelvic area after her pain became severe.

According to her, the suspect allegedly defiled the 12-year-old girl on two separate occasions in his room after the victim brought him iced water.

DSP Sophia Ennim disclosed that mother of the victim later detected the sexual abuse of her daughter after the victim began limping.

The poor girl failed to disclose her ordeal to the mother because the suspect, John B. Mensah, told her she would die if she did.