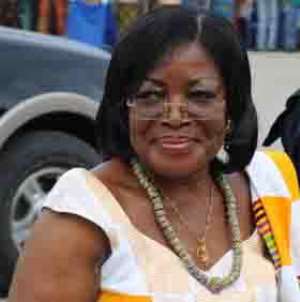 AN ATTEMPT by the Central Regional Minister, Comfort Ama Benyiwa Doe, to allegedly prevent the chiefs and people of the Asebu Traditional Area from honouring former President John Agyekum Kufuor today, has backfired.

The chiefs have vowed to go ahead with the programme whether the minister likes it or not.

Mrs Benyiwa Doe seemed to be unhappy about the way the traditional authorities were going to honour Mr Kufuor, hence asking the traditional council to postpone its annual Apayamkese festival.

According to DAILY GUIDE information, although the organizers claimed they sent the invitation with an attached programme to Mrs. Benyiwa Doe, she alleged that she only received the invitation letter.

DAILY GUIDE further gathered that the regional minister said the programme would have enabled the Regional Co-ordinating Council to factor in security arrangements for Vice President John Dramani Mahama, who had been invited, as well as former President Kufuor.

Speaking to Kinsley Karikari Bondzie, who is in charge of publicity, he disputed the allegation by the minister that they sent only the invitation letter.

Mr Karikari indicated that the police had now agreed to give the chiefs and the invited guests all the needed protection to ensure peace and tranquility at the festival.

DAILY GUIDE can state that this is the first time such an incident has happened during the annual Apayamkese festival, as the police in the region even went to court to seek an injunction to restrain the traditional council from hosting the festival.

DAILY GUIDE gathered that a group of people who were used to organise a press conference on Thursday to create an impression that there was tension in the area had since apologised to the paramount chief of the area, Okatakyi Dr Amanfi.

At a press conference organised at Asebu on Friday, Okatakyi Dr Amanfi said although there were a few problems, with regard to the festival, the traditional council had been able to resolve the problem with the help of the Central Regional president for house of chiefs, Daasebre Kwebu Ewusie.

Okatakyi Dr Amanfi stressed the need for the youth not to allow themselves to be used by a group of people to destroy the beauty of their festival.

'Asebu is the only place we have so do not let some unscrupulous people encourage us to tarnish the image of our own town since we will not have place to run to if there is mayhem,' he said

Okatakyi Dr Amenfi
He added that the festival would come on and therefore appealed to all invited guests to make it a point to attend.

The festival would be used to raise funds to support the Okatakyi Amanfi VII Education Fund, Kakari Bondzie noted.

'The regional minister ought to be held responsible [if any confusion ensued] because her utterances on radio have caused a lot to us as citizens, we are hurt.

'So if there should be any anger, it would be directed at the Regional Minister and the District Chief Executive.'

The District Chief Executive, William Atta-Mends, warned that the situation in the area was 'very, very dicey' because of a 'growing danger' in connection with the festival.

He therefore wanted the necessary action taken to avert any unforeseen calamity.

'We are urging all Asebu citizens in and out of this country to come,' Karikari Bondzie said.

'The regional minister went on air without consulting our chief to tell the whole world there is no peace in Asebu so because of a security threat she has postponed the festival.

'They said because we didn't inform them about the coming of former President Kufuor, they didn't make adequate provision for security. Then we said they are wrong because we informed the District Police Commander a month ago and he met with the Traditional Council including the Paramount Chief,' he stated.

'They [police] were planning to bring 12 policemen but because of the coming of the former president, they've increased the number of policemen from 12 to 25 and they understand if the Vice President, if he would come, would come with his police detail,' he added.

He noted: 'We have video tapes of all that meeting so the regional minister cannot come on air and tell us they didn't make adequate provision.'

Meanwhile, it is unclear if former President Kufuor would honour the invitation to the Apayemkese festival.

Staff at his office refused to confirm or deny his participation when Joy FM inquired, even though they said he had received the invitation.