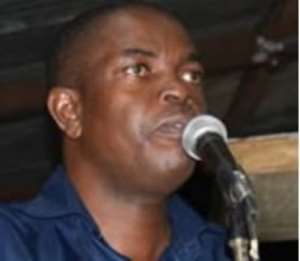 Outspoken member of the Convention People's Party (CPP), Mr Kwesi Pratt Jnr., says he is scandalised by the silence of the party's lone Member of Parliament on the raging debate over the $3 billion Chinese loan agreement.

Mr Pratt said he was “embarrassed and ashamed” that till date, Mrs Yaba Samia Nkrumah has not said a word about the loan agreement.

“There are many other issues which we can discuss with regards to this loan facility but there is one which is particularly dear to my heart – this is an important national discussion; this about the development of our railways, of our road infrastructure, the fishing industry and so on – and I am a member of the Convention People's Party and the party has a representative in Parliament and up till today, the party's representative in Parliament has not said one word about this development. I'm embarrassed and ashamed!”

Kwesi Pratt who was speaking on Radio Gold Alhaji and Ahlhaji Programme, Saturday, said the CPP and other smaller parties cannot expect commentators such as himself to support them in public discussions when they remain aloof while important national issues are being discussed.

“Today we are discussing the Chinese loan of $3bn, how am I going to support the CPP when there is no CPP position? And then they turn round and say 'you are NDC, you are speaking for NDC, you are speaking for this.' How can I speak for the CPP when the Member of Parliament for the CPP, in this crucial debate, is dead silent, is not speaking, when the party itself has not taken a position,”? he quizzed.

Samia Nkrumah and the CPP's silence on the debate, he said, does not help the party and “I am embarrassed by this silence!”

Replying Kwesi Pratt, the Jomoro MP, Samia, said neither she nor any Member of Parliament from the Western Region – the largest beneficiary of the loan facility – was against the agreement.

What the debate was about, she noted, was that there should be greater transparency in the application of the loan to ensure the nation gets value for money.

She rejected Kwesi Pratt's suggestion that she was aloof and silent on the debate insisting she failed to catch the eye of the Speaker to make her submission before the debate was brought to a close.

She however conceded that it was bad enough the CPP as a party did not state its position on the debate but explained that it was precisely because of that that she and others were in the trenches campaigning for a change in the leadership of the CPP so that such gaps can be plugged in the future.

Covid-19: 73 Children Roaming About In Takoradi Arrested
46 minutes ago

COVID-19: French Physician Warns Africa Against Vaccine From...
46 minutes ago