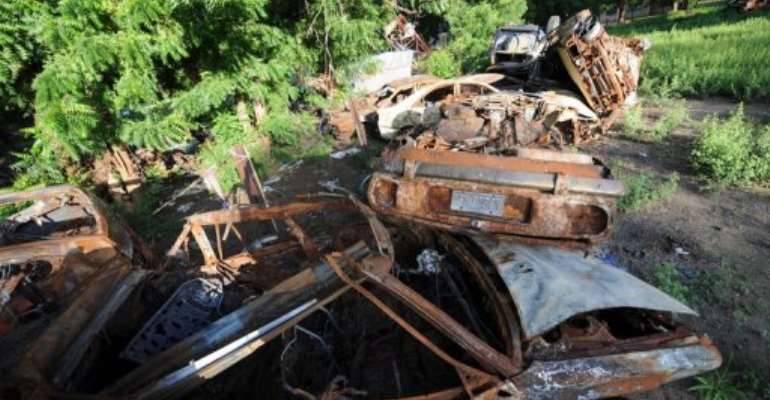 Cars of members of the Islamic sect Boko Haram burnt by the police and military. By Pius Utomi Ekpei (AFP/File)

KANO, Nigeria (AFP) - A Nigerian Islamist sect that staged a series of deadly attacks mainly in the country's north on Wednesday threatened "fiercer" attacks and said it would not enter into talks with the government.

The Boko Haram group, which had two days ago laid down conditions for any talks with government, also disclosed for the first time that it had links with Islamists in Somalia.

"Dialogue with President (Goodluck) Jonathan has collapsed," because of the statements made by the inspector general of police and governor of northern Borno state, the group said.

It said it was angered by the police chief Hafiz Ringim's declaration that "the days of Boko Haram are numbered".

"Very soon, we will wage jihad...We want to make it known that our jihadists have arrived in Nigeria from Somalia where they received real training on warfare from our brethren who made that country ungovernable...," said the group in a handwritten statement.

"This time round, our attacks will be fiercer and wider than they have been," it said, adding it will target all northern states and the country's capital Abuja.

The statement in Hausa, a widely spoken language in the north, was anonymously delivered to journalists in the northeastern city of Maiduguri, capital of Borno state, where the attacks are concentrated.

The sect admitted links with a foreign Islamist group connected to Al-Qaeda, although security experts had already speculated that it had established ties with Islamists in north Africa.

The statement purportedly emanated from "Jama'atu Ahlis-sunnah lidda'ati wal Jihad", another name the sect calls itself.

Boko Haram had on Monday issued a statement setting conditions for ceasefire and dialogue with the government, which included the strict application of sharia law in the 12 predominately Muslim states in the north.

Also known as the Nigerian Talibans, the group launched an uprising in 2009 which was put down by a brutal military assault that left hundreds dead.

The sect, which has pushed for the creation of an Islamic state, has been blamed for shootings of police and community leaders, bomb blasts and raids on churches, police stations and a prison.