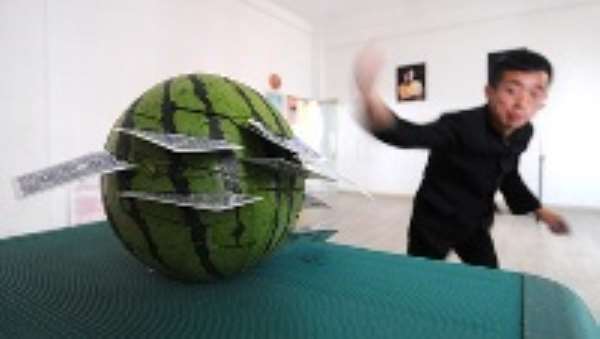 
A Chinese man has carved out a new career as a card sharp - by using his kung fu training to hurl playing cards like throwing knives.

Bai Dengchun, 23, can throw cards with such force and accuracy that he can slice a cucumber or burst a balloon from 16ft away.

His parents thought his unusual hobby was a waste of time - until a slot on TV led to an opening as a performer in magic shows.

Bai, from Qingdao, northern China's Shandong Province, showed off his skills by throwing 28 cards into a watermelon from 10ft away.

He can also use his card-throwing talents to break an egg or knock off the end of a lit cigarette from a friend's mouth.

"The cards are like darts to me. I can precisely hit any target within a five metre radius," said Bai, who learnt kung fu from childhood.

Ironically, he developed his talent because he was such a poor poker player: "When I was young I loved playing poker but I always lost," he explained.

"I would always end up throwing my hand away and eventually I realised I could throw the cards a long way away - and very accurately.

"Three years ago I decided to give up poker and take up throwing cards instead.

Each month I used part of my salary to buy cards to practice with and it's paid off."