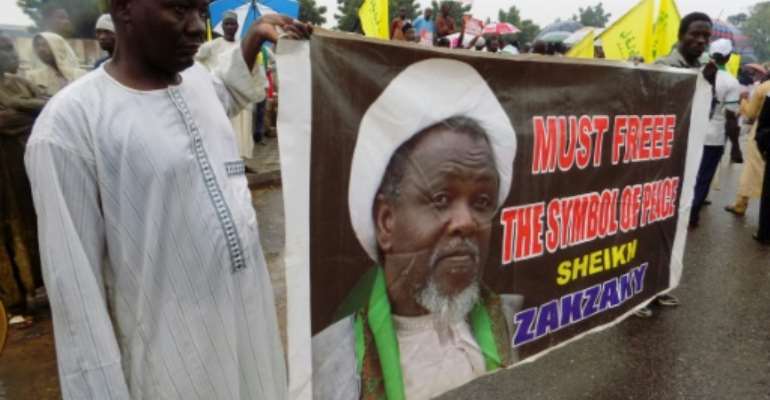 Kano (Nigeria) (AFP) - Authorities in northern Nigeria on Monday called for the prosecution of the leader of the pro-Iran Islamic Movement of Nigeria, whose detention after deadly clashes between his supporters and soldiers was recently overturned by a federal court.

The government of Kaduna State said Ibrahim Zakzaky, the head of the Shiite IMN, should be tried for the group's alleged "lawlessness" for the past 30 years.

It said he should be "held responsible, fully investigated and prosecuted" for all the "acts of lawlessness committed by the organisation".

Kaduna's government accuses the IMN of "allegiance to a foreign power", an apparent reference to Iran.

The call came just days after a federal high court ordered the government to free Zakzaky, who has been detained without trial since December last year, within 45 days.

On Friday, Justice Gabriel Kolawole ordered that Zakzaky and his wife should be released and provided with decent accommodation and awarded the couple $158,000 (146,000 euros) in damages.

Zakzaky was arrested after two days of violence last December, when his supporters refused to allow the chief of army staff's convoy to pass through the northern city of Zaria in Kaduna state.

Zakzaky was shot and injured, leaving him partly paralysed and blinded in one eye while his home and several sect religious centres were demolished.

The new order against Zakzaky could threaten his release as the Kaduna state government could file charges against him.

The military has claimed the IMN was trying to kill Nigerian army chief Lieutenant-General Tukur Yusuf Buratai during the unrest.

In October, the Kaduna government banned the IMN as an illegal group and a security threat.

The latest move could heighten tensions in a country where the army is fighting Boko Haram Sunni jihadists in the north and militants sabotaging oil installations in the southern Niger delta.

Judge Kolawole warned against demonising the IMN, warning that if Zakzaky died in custody it would result "in many needless deaths."

Boko Haram founder Muhamed Yusuf was killed by Nigerian police in 2009, unleashing a backlash and sparking the deadly insurgency.