Gbabo is Defeated in Disgrace amid Mills' Proclamation of Dzi wo Fie Asem; Is Mills a Confused Nkrumahist? 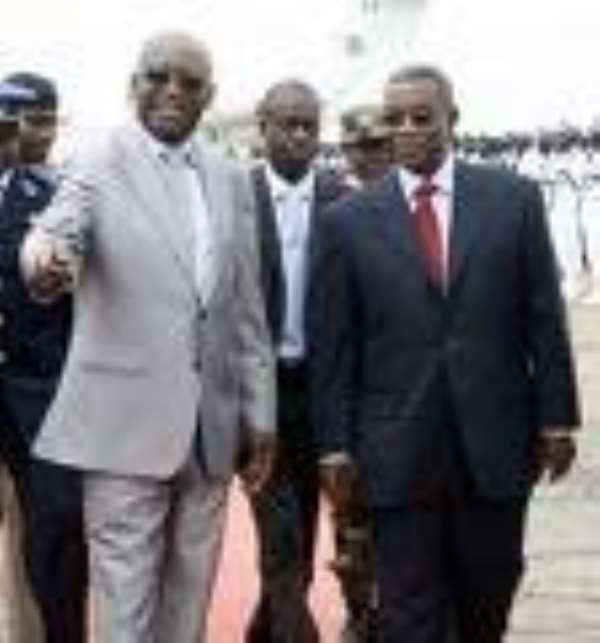 On Ghana's Independence Day 6th March 1957, Nkrumah said: “The independence of Ghana is meaningless unless it is linked-up with the total liberation of Africa”. Conversely, on the second anniversary of his Presidency, 7th January 2011, Mills said: “Dzi wo fie asɛm”. Whereas Nkrumah had the spirit of pan-Africanism and would deem his country's long struggled for and hard-won independence worthwhile only on condition that all non-Independent African countries are also able to shirk off their Colonial shackles and drained Ghana's cash into funding other countries independence negotiations, John Mills, a supposed hard-lined Nkrumahist has a different view on pan-Africanism. He thinks and believes in the philosophy of each for himself, hence the principle of mind your own business, therefore, when answering a question posed to him regarding Ghana's congenial international relations with post-election war torn Ivory Coast by Malik Kweku Baako in the presence of top ranking Ghanaian and foreign Journalists, his succinct unbecoming vituperatory retort was: “Dzi wo fie asɛm”, a clear and unequivocal departure from the tenets of Nkrumah and all his faithful pan-African disciples.

Though the above two statements sound incompatible with one another, they may share a common spirit especially on issues involving the Ivory Coast not as a country but on the ideological stance of their respective leaders. It may be recalled that when Nkrumah was President of Ghana, he was all out with sword and buckler against Felix Houphouêt Boigney the Ivorian President by reason of their conflicting ideo-political credos. Whereas Felix had a leaning towards France and the Western Capitalist system, Nkrumah was a pro-Russian communist campaigner. Several efforts were made by Nkrumah to subvert and oust him in order to enable him annex the Ivory Coast to his communist campaign gains by planting a like-minded communism-inspired leader but strong-headed Felix would not join the communist fraternity that Nkrumah was spear-heading between 1960 and 1966 and indeed he was steadfast and watchful of the brewing subversive activities from Ghana. Similarly Felix wished Nkrumah would get lost with his communist galimatias, a political system he strongly disagreed with and condemned as idealistic but unrealistic on several scores therefore against the grain of nature, personal, family and social development in diversity. The only similarity between the two leaders was that, common and usual with early post-colonial African leaders, both were power-drunk dictators of no mean measure.

John Mills as President of Ghana has shared common ideas and understandings with Laurent Gbabo including offering every needed support to remain in power even when he had significantly lost in the polls to his opponent. The quizzing issue is in regard to why John Mills, to whom power was handed-over irenically, having won in the polls with a slim majority, would instigate and support his Ivorian counterpart who had lost quite significantly not to hand-over. The Nkrumahist spirit in John Mills over Gbabo and the 'dzi wo fie asɛm' saga is the apparent encouragement and support he lent to a would-be power-drunk facinorous dictator whose pleonasm and over-much political ambition had drifted his country into remorseless bloodshed and near-civil war to which he would never budge. His anti-Nkrumahist element can be discerned only from his 'dzi wo fie asɛm' edict however, from another angle, dzi wo fie asɛm can be likened to Patrice Lumumba being turned away and not offered a safe haven when he flew in to Ghana to consult and seek advice from Nkrumah at a time when Congo was in political turmoil, out of senseless communist radicalism bravado, Lumumba was misadvised by his high profile consultant (the Ghana President) to go back and square-up with his domineering opponents only to be murdered in cold blood by his captors. Gbabo similarly flew in to consult and be advised on what to do in the circumstances and my guess being as good as yours, John Mills and his advisors including all-knowing yet empty-headed Kwesi Pratt and vampire Kojo Tsikata as one of Gbabo's security advisors, similarly ill-advised him to go and fight on only to meet his 'Waterloo' dénouement. One may ask as to why Mills could not advice Gbabo to honourably concede defeat. The one and only probable answer is that John Mills did not have the mental capacity intelligible and mature enough to offer any scholarly or realistically thought worthy cogent advice to his consultee. In his right frame of mind as professor eirenicon, Mills should have taken into consideration the fact that between 2002 and 2011, no less than 3000 Ivoirians died in a political conflict therefore it would be quite unethical to goad Gbabo onto fighting a senseless post-election war with high casualties. Here is Mills who proclaims to believing in investing in people as his Party's catch phrase yet aiding and abetting in destroying people. To sum it all up, John Mills was then a mischievous adviser.

Though dzi wo fie asɛm may sound incompatible with, and may equally sound as a complete departure from 'the pan-Africanist Nkrumah's Ghana Independence statement, the grain, the essence, the connotation and the objective of the two edicts are one and the same. Dzi wo fie asɛm sounded in the ears of simple minds as if John Mills was in fact “dziing” his fie asɛm in the sense of frankness and sincerity becoming of a President who would honour his deed of saying, it was one of the most insincere made-to-believe wheedling and hypocritical statements he has made in his 27 months old administration. Contrary to what he had made the world to believe, John Mills as Ghana's Tartuffe yet so-called God-fearing President was actively involved in fanning the flames of conflict that could result in a massive carnage in his neighbouring country for as long as his deceitful actions were pointing in the direction he had envisaged to favour him. John Mills' advice and support for Gbabo who had lost in his country's elections to his opponents but would not want to hand-over was not just for nothing, rather it is a precursor to what Mills and his NDC plan to do when they lose power to the Nana Addo-led NPP in 2012, especially Nana Addo, the political jewel who NDC supporters unreasonably and out of indoctrination hate to decipher him ever becoming Ghana's President. If this is indeed their plan, the precedence message is more than clear from what has happened in the Ivory Coast.