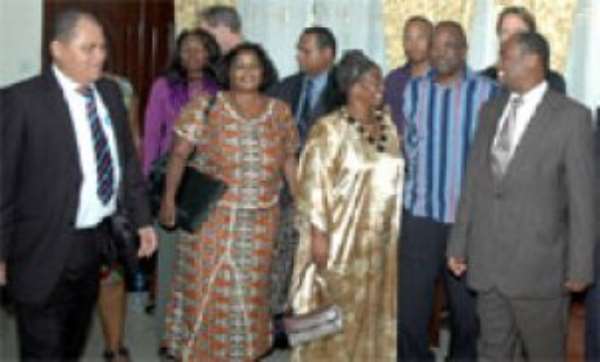 The Electoral Commission (EC) has expressed the wish to adopt the electronic voting system in the next general election because it will solve many problems in the election process.

“It is our wish because it will solve a lot of our problems”, the Deputy Chairman of the EC (Operations), Mr Kwadwo Safo Kantanka, responded to a question posed by the Daily Graphic as to whether electronic voting would be used in Election 2012.

He, however, indicated that electronic voting would be applied only if the system was ready by the time of holding the next general elections.

Mr Kantanka made the submissions after an interaction with two delegations from The Netherlands Institute of Multiparty Democracy and the Parliament of Mozambique.

The two delegations were in the country as guests of the Institute of Economic Affairs (IEA) to interact with key political stakeholders in the country and, for the Mozambican delegation in particular, to learn more about the positive strides Ghana had made in democratic governance and conduct of elections.

There have been calls from the general public for the adoption of electronic voting in Election 2012, but Mr Kantanka said “If everything goes on well, we will use the system for the 2012 elections”.

The EC placed an advertisement in the Tuesday, February 8, 2011 issue of the Daily Graphic, requesting an expression of interest from Ghanaian companies in the biometric technology in line with its arrangement to replace the existing voters register that was compiled in 2004.

The advertisement called on organisations who have the capacity to provide equipment for biometric registration to avail themselves of the opportunity.

Two months afterwards, the commission is yet to review the interests so expressed by individuals and organisations for the provision of equipment for biometric registration, according to Mr Kantanka.

In response to another question, he said the EC had not yet decided to create additional constituencies and polling stations, although he acknowledged that widely-separated polling stations often demarcated in sparsely populated areas could indirectly disenfranchise some people because they might not wish to walk long distances to vote.

Earlier in an interaction with The Netherlands and the Mozambican delegation, Mr Kantanka briefed them on the history, composition and functions of the EC.

He said the EC was apolitical and that to the best of his knowledge, none of the commissioners had exhibited any political bias in the course of their duties.

On the issue of state funding of political parties, Mr Kantanka said a draft bill had been prepared in that respect, under the auspices of the IEA, and expressed the hope that it would come to fruition very soon.

He said the election process was very important and if well-managed, it could help avoid a lot of problems.

The Executive Director of the IEA, Mrs Jean Mensa, welcoming the two delegations to Ghana, expressed the hope that their mission would be very fruitful.

The leader of the Mozambican delegation, Mr Antonio Chipanga, said there were a lot of things Mozambique had to learn from Ghana, the latter having attained political independence much earlier and made great strides in the democratic process.