What's Behind the Calls for Military Intervention in Ivory Coast 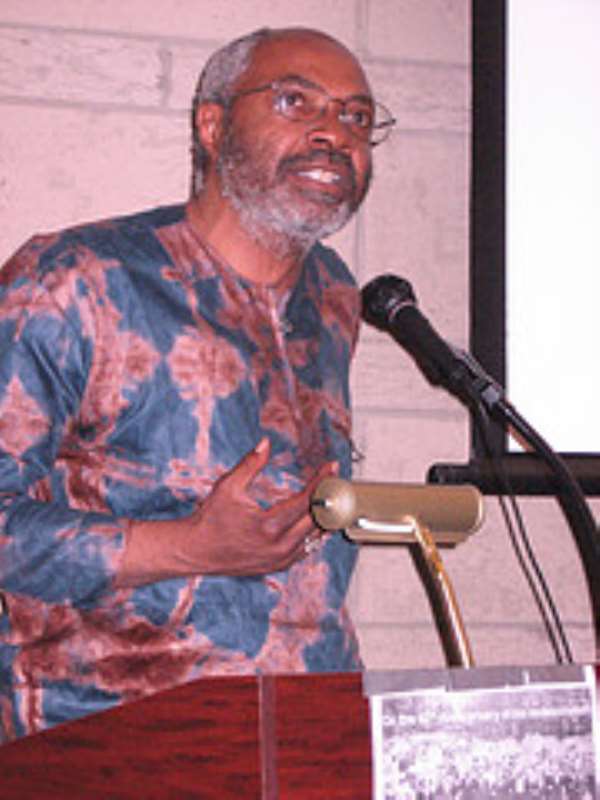 A dispute over a recent national election in the West African state of Ivory Coast has prompted calls by the United Nations Secretary General Ban Ki-moon for the incumbent President Laurent Gbagbo to step down. According to the UN head, the electoral commission has determined without a doubt that opposition leader Alassane Ouattara had won the elections.

This position has been echoed by the United States State Department which has also taken the position that the Gbagbo administration must resign and that Alsanne Ouattara is the legitimate leader. The regional organization, the Economic Community of West African States (ECOWAS), has been reported to have threatened military intervention in Ivory Coast if Gbagbo does not leave office.

These pronouncements and other actions such as leveling sanctions against the Gbagbo administration by freezing credit and bank accounts through the international banking system, has emboldened the supporters of Ouattara inside the country. Earlier in December a group of Ouattara supporters attempted to seize control of the television station in Abidjan, an action that was repelled by the security forces of the government leaving at least 18 people dead.

Why has the UN Secretary General and the Obama administration taken such an interest in developments in Ivory Coast, a former French colony of 30 million people which underwent civil unrest, a military coup and a civil war over the last decade or more? Why should the Ivory Coast be viewed as a test case for Africa, the African Union and ECOWAS and not similar developments that have occured in Mauritania, Guinea, Guinea-Bissau, Niger, Madagascar and Kenya over the last several years?

These economic sanctions, public villifications and threats of military invasion are taking place absent of any serious efforts by the U.S. and France to reach a diplomatic solution to the crisis. What is happening in Ivory Coast cannot be viewed in isolation from the overall U.S. and French policy of increasing military involvement in West Africa under the guise of the so-called "war on terrorism."

The Ivorian crisis and the breakdown of neo-colonial rule

During the period of French colonialism and the first three decades of independence (1960-1990),Ivory Coast was promoted to the public as a model for imperialist rule that worked. Even under colonialism where there was militant mass organizing by the Rassemblement Democratique Africain (RDA) and its trade union counterpart, in 1958 the de Gualle regime in Paris offered its colonies in West Africa to either formally accept a subservient political role under France or to strike out independently.

Only Guinea under the leadership of the Democratic Party headed by Ahmed Sekou Toure voted overwhelmingly to become an independent state. Guinea would pay a severe price for its challenge to French imperialism and the Ivory Coast under Felix Houphouet-Boigny was rewarded with capitalist investment and tourism.

Ivory Coast continued as an outpost of France albeit with a facade of independence in 1960. The RDA and the Union Generale des Travailleurs de l'Afrique Noire (UGTAN) split into pro-French and militant factions that were aligned with the PDG in Guinea under Sekou Toure.

Guy De Lusignan in his book entitled "French-Speaking Africa Since Indpendence", said in reference to the 1960s, that "The Ivory Coast could not be what it is today without the presence of a large body of Frenchmen, both in administration and in private business. Houphouet-Boigny and his team have been policymakers of undeniable worth." (De Lusignan, 1969, p. 142)

The author continues by noting that "They staked their all on big business and foreign capital. The brilliant potentialities of the country are a challenge and their answer to that challenge is undoubtedly 'neo-colonialist' in spirit."(De Lusignan, p. 142)

Yet in 1965 there was a sharp decline in cocoa prices and other agricultural commodities on the western markets. The country shifted to a more diversified economy with production projects in palm oil, rubber, cotton, tropical timber (that could be trans-shipped in much larger quantities through the-then new harbor at San Pedro in the west of the country), tropical fruit and fisheries." (De Lusignan, p. 144)

In addition, the exploitation of manganese deposits began in earnest during this period when production grew from 105,000 tons in 1964 to 171,000 in 1965. By the late 1960s, industrial production in the Ivory Coast expanded with the establishement of light electrical plants, chemicals and oils, timber, textiles, building materials and shoe factories.

This state of affairs continued through the 1970s and 1980s and served as an ideological challenge to revolutionary armed struggles in other parts of Africa as well as the socialist experiments that occured in Guinea, Ethiopia, Somalia, Tanzania, Angola, Mozambique, Congo-Brazzaville and other states. The western imperialist states maintain that capitalism was the best model for development in post-independence Africa.

However, during the early 1990s, severe problems arose within the French CFA currency zones and these developments had a tremendous impact on the Ivory Coast as well as other states aligned with Paris on the continent. Unrest arose again after it was thought to have been crushed in early 1960s.

In 1993 Houphouet-Boigny died and Konan Bedie took over as the leader of the Democratic Party of the Ivory Coast. Bedie was overthrown in a military coup at the end of 1999, bringing Gen. Robert Guei to power.

By the end of the 1990s, the economic crisis in Ivory Coast had contributed to the political instability and to a coup as well as the division of the country politically between the north and the south. An election in 2000 led to the presidency of Laurent Gbagbo while the northern politician Alasanne Ouattara was disqualified over claims that he was not of Ivorian origin.

The increasing regional divisions in Ivory Coast became a factor under the rule of Konan Bedie during the mid-1990s where the presence of a large immigrant population as well as the country's national diversity were deliberately politicized. Such divisions helped to create the conditions for a civil war which erupted in 2002.

The civil war further enhanced national divisions in Ivory Coast. France, which deployed its military forces during the civil war was accused of supporting both sides in the conflict. In 1995, under Gbagbo, Ivorian military forces bombed areas in the rebel stronghold city of Bouake and killed nine French troops.

France claimed that the attacks were deliberate and has held the deaths of their soldiers against Gbagbo over the years. The Economic Community of West African States (ECOWAS) did intervene in the Ivory Coast in 2002 but were later replaced by forces under United Nations control.

UN forces still remain in Ivory Coast but claim that their role is strictly to monitor the movement of military units of both the central government and the rebel troops in the north. The threat of the resumption of military conflict could lead to greater involvement of France and the United States in the internal affairs of Ivory Coast.

Military conflict and the role of imperialism
The United States, stung by the revelations emanating from classified military documents and diplomatic cables released by WikiLeaks, has taken up the Ivorian crisis as a major focus of its foreign policy in Africa. This conflict provides an avenue for the State Department to re-emerge as a "legitimate force" in purportedly resolving an African political crisis.

However, the role of the U.S. in Africa has been growing through the greater reliance on the export of oil from the continent and the increasing presence of the Pentagon's miliary forces in the region. In West Africa, the U.S. has developed partnerships with Mali, Ghana, Morocco and other states in the so-called "war on terrorism."

What the WikiLeaks diplomatic cables revealed was that through successive U.S. administrations, including Barack Obama, the same imperialist aims and objectives determine the character of its foreign policy toward Africa. Obama has increased funding to U.S. military operations in Africa and is seeking to influence developments in Nigeria, Sudan, Zimbabwe and Somalia among other states.

Therefore, the motivations of U.S. imperialism is strictly designed to further penetrate the economic, political and military affairs of the continent. The threatened intervention by ECOWAS would inevitably translate into large-scale deployments of both Nigerian and Ghanaians troops into Ivory Coast.

Such an operation that would place thousands of ECOWAS troops in Ivory Coast would require the logistical support of the U.S. and France. This would place the imperialists in a position to monitor events in Nigeria, with its own political problems of regional and intra-religious conflict, as well as other states including Mali and Sudan.

Nigeria, which has undergone an escalation in violence in Jos, several northern states and the oil-rich Niger Delta, is under severe U.S. pressure. Just recently the U.S. forced the government to abandon a civil suit against Pfizer pharmaceutical company and a criminal complaint against former Vice-President Dick Cheney and his former firm Halliburton/KBR.

Consequently, anti-war and peace movements inside the United States must oppose any effort by the U.S. to bolster its military presence in Africa by utilizing the Ivorian crisis as an excuse to indirectly invade the country through funding, coordinating and transporting ECOWAS troops in an invasion into the Ivory Coast. Such a course of action could spark even more bloodshed in the West Africa region.

The mediation efforts of former South African President Thabo Mbeki provides some hope of resurrecting a political solution to the crisis. Why should their be an ultimatum given to Gbagbo while the other states in the region have been able to work out internal problems through political intervention and negotiations?

The United States Africa Command (AFRICOM) over the last year has conducted large-scale military maneuvers on the continent. In West Africa war games have been conducted under the guise of enhancing the security capacity of African states.

In the Horn of Africa it is U.S. imperialism that is propping-up the fragile and corrupt Transitional Federal Government in Somalia. Off the coast of Somalia in the Gulf of Aden and the Indian Ocean, the U.S. and the European Union (EU) are leading flotillas of warships under the guise of fighting piracy.

Also in the Horn of Africa, both the U.S. and France have military bases in the nation of Djibouti. The U.S. presence in the region, WikiLeaks has revealed, is at the root of the destabilization of the region that has created one of the worse humanitarian crises in the current period. In Somalia over 200,000 people have died in the last four years and more than 2 million have been displaced as a direct result of the intervention of both the Bush and Obama administrations.

There is fundamentally no difference in U.S. imperialist policy under Obama. The Obama administration has not only escalated U.S. military involvement in Africa but has expanded the war in Afghanistan and spread it into neighboring Pakistan.

It is the Obama admininstration that has shielded the Bush administration from civil suits and criminal prosecution by both domestic and international elements who have fallen victim to U.S. war policy as well as corporate and official state corruption.

The Obama administration is now targeting anti-war organizations with illegal searches and seizures as well as subpoenas to appear before federal grand juries under threat of prosecution and long-term prison sentences. The only "crimes" carried out by these activists is that they have spoken out against U.S. foreign policy in Colombia and Palestine.

Therefore, anti-war and peace activists must look beyond the claims of the U.S. government that it is concerned about "good governance" in Africa when there are crimes being commited by leading officials who are shielded from civil liability and criminal prosecution by the Obama administration.

The author has 208 publications published on ModernGhana.