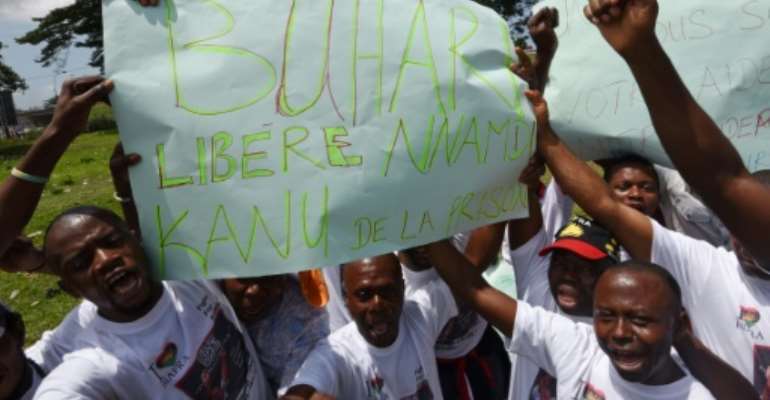 The petrol price increase in Nigeria has been seen as a removal of subsidies the government pays to fuel importers and a recognition of market forces. By Pius Utomo Ekpei (AFP/File)

Abuja (AFP) - A Nigerian court on Thursday refused bail to a separatist activist, whose arrest last year sparked a wave of bloody protests across the country.

Nnamdi Kanu heads the Indigenous Peoples of Biafra (IPOB) group, which has emerged as the new face of the campaign by the Igbo people of southeast Nigeria for a separate Biafra state.

He has been in custody since his arrest in October 2015, facing charges of treason, operating pirate Radio Biafra and belonging to an unlawful organisation.

Federal high court judge Binta Nyako refused an application by Kanu's lawyers to release him and three others, ruling that the "alleged offences for which the defendants are standing trial are serious."

Nyako said Kanu and the other suspects could face up to life in prison if convicted.

In refusing bail, Nyako also ordered the case heard "almost immediately but not later than two months from now."

"We are surprised at the ruling of the court but we still have the right of appeal," he said.

The court is now adjourned until December 13 to consider a prosecution request for the trial to be conducted behind closed doors to protect witnesses.

Dozens of pro-Biafra campaigners stood outside the court chanting slogans such as "All hail Biafra" and "All we want is freedom."

After the hearing, Kanu and the other suspects, all dressed in white, were whisked away by security officials.

At least three judges, including in an ECOWAS court, have ordered Kanu's release, but the Nigerian government refused to free him, saying he would jump bail.

Kanu's separatist IPOB group has held a series of protests across the country in recent months, sparking bloody clashes with the security forces.

Last week, Amnesty International accused security agents of killing some 150 Biafra protesters in the past year, but the military denied the charge.

Kanu is pushing for a separate republic of Biafra, nearly 50 years after a previous declaration of independence sparked a civil war.

The 1967-70 conflict left more than a million people dead, most of them from starvation and disease, as the Igbo nation was blockaded into submission.