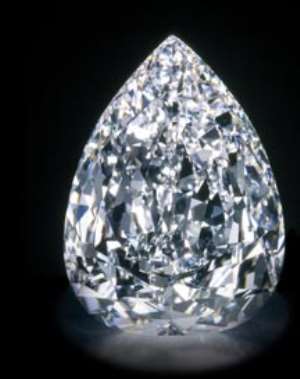 It is a well known fact that Ghana's diamond industry is facing hard times. Production volumes have been falling, and employment generation from the industry, both formal and informal - has declined.

Production statistics do, indeed, indicate that in 2009 diamond production declined by almost 50 per cent. While this, in part, is due to the diversification of the portfolio of small-scale miners (or licensed galamsey operators), away from diamond mining to gold, as a result of the better market prices prevailing for gold, it is undisputed that the moribund situation of the major diamond mining company in West Africa – the Ghana Consolidated Diamond (GCD) Limited - is a major contributory factor. GCD Ltd. has since August 2007 closed down its operations, leading to the severance of almost 807 workers, who are yet to be paid their severance package, and who, while in employment, kept the small town of Akwatia alive and functional. The township of Akwatia is reported to be hanging on critical life support in need of an urgent new lease of life.

In looking at the way forward in revamping the industry it is important to recall that the structural weaknesses that precipitated the decline of GCD are known. When the Acheampong regime partially nationalised the company in the 1970s and the Selection Trust of London decided to pull out its 45 per cent shareholding, the management of the now wholly-owned Ghana Government company became slightly dysfunctional. With little governmental interest to demand accountability and a dearth of plant and equipment renewal (the newest plant was commissioned in 1965), the company began its downward slide, in sharp contrast to Ashanti Goldfields Corporation where Ghana Government's keen interest led to sharp improvements in the fortunes of the Obuasi mines.


In the history of GCD, it appears that its good days were those associated with foreign partners. This may perhaps be the reason why some tend to be eager to call for foreign investors to take over the operations of the mine as a way of resolving the difficulties the company has worked itself into. Indeed, the Divestiture Implementation Committee has for close to a decade and half had GCD on its divestiture list. Previous attempts were remarkable failures and a new attempt, which it is hoped would be successful, was initiated in March 2010 with the opening of tender. In the aftermath of the tender the traditional leadership of the township where the diamond concessions are have actually petitioned the Ghana Government for its interest to be given to one Great Consolidated Diamonds Limited (GCD Ltd. also) for reasons that relate, perhaps, to their belief that the new GCD might be able to better run the mine. If the bidding process brings out a credible company, that would be good.

However, for the self-esteem, integrity and selfish interest of Ghanaians, I hold the view that the Ghana Government should rather than follow the thrice repeated attempt at selling off the mine, resuscitate the company and allow Ghanaian staff to turn around its fortunes to show the world that “after all the black man is capable of managing his own affairs”.

Results from exploration projections show that the alluvial tailings of the Akwatia concession of the GCD mine alone contain close to 4 million carats of diamonds (of 0.2 grade) and 2 million grams of gold. Also, initial exploration works on the middle birim river and lower birim river suggest proven reserves in excess of over 14 million carats of diamonds. This excludes exploratory works on the terraces and other deposits, where aside diamonds, there are great prospects for other minerals.

A rough financial estimation for the Akwatia concessions alone should therefore be giving revenues in the region of US$50 million for the gold in the tailings and depending on clarity, colour etc. close to US$2 billion for the diamonds in the tailings. When the other concessions are brought on board the revenue projections do indeed look promising. With this kind of revenue under consideration, the Ghana Government should be in a position to assist the company access funding from the public purse itself or provide support for the company to access international credit at reasonable terms for its working capital and equipment.

It is understood that the company requires, in the short-term, US$15 million for its liabilities, including arrears owed VRA and the severance package of retrenched workers (that could, however, be paid in phases based on negotiations with the concerned taking into account the expected revenue streams when the activities of the company are reactivated). Also, it is understood that an additional US$20 million is needed for new plant and equipment, making a total US$35 million needed to re-start operations.

Considering the revenue potentials, however, it would seem reasonable for the Ghana Government to reconsider its long held view that the mine should be disinvested. It would also be reasonable to expect that any further involvement by the Ghana Government in re-capitalising GCD Ltd. would need to proceed along some clear-cut, no nonsense business lines.

First, there would be need for a complete restructuring of the company, its organisational structure, corporate governance principles and accountability regime, conditions of service of staff, mode of operation, etc., aimed at ensuring effectiveness and efficiency in the mining operations, adopting cost-effective and competitiveness measures in comparison with global comparators and renewing the personal and professional integrity of the staff. Audited accounts and some AGM accountability would need to be in place.

Second, re-equipping decisions should be based on sound business argument. For instance, new processing plants required should be close to the mine area to reduce haulage costs which have bedevilled the company in the past just as modern security tools would be required to reduce pilfering of diamonds. If self-generated electricity from the water dams of the company could be deployed to augment the VRA supplies and reduce cost that should also be considered. In other words, a new business model should be developed as the old ways of doing business has not brought sustainable result for the company.

Third, the mined diamonds and gold, etc should be enhanced by bringing in service providers who can cut, polish the diamonds or refine the gold for prime global markets to ensure that maximum value and returns for the products are obtained.

Fourth, the Ghana Government must take the decision to offload a significant portion of its 100 per cent share in the GCD (about 40 per cent) on the Ghana Stock Exchange for the Ghanaian public. The traditional authorities on whose land the mining activities take place could also be assigned a 10 per cent interest in trust.

Fifth, the reclamation of the mined out land should be done in such manner as can provide employment for the youth of the mining area. In this regard, jatropha cultivation could be carried out for the production of bio-diesel which would then be processed and given to TOR or any such entity for blending. The benefits to both the company and community are obvious.

Indeed, there are many more small ideas that should be generated to revamp GCD and other distressed state-owned commercial enterprises to justify the claim we all believe and aspire to fulfil that the Blackman is indeed capable of managing his own affairs.