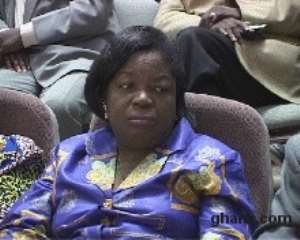 THE DEPUTY Minister of Finance, Grace Coleman, who has been indicted for allegedly bringing a Ghanaian woman into the United States illegally and aiding & abetting in her enslavement, may voluntarily resign tomorrow. She can no longer travel to the US on official business, because she will be picked up the minute she reaches the US. Mrs. Coleman, an ambassador in the Netherlands during the previous government, may be aware of the implications. According to sources, she was involved in similar fraudulent visa deals and "enslavement" in the Netherlands. However, she was never indicted nor convicted for such an offense. According to The Chronicle, Her boss, Mr. Osafo Maafo, will not be shedding a tear for her, because he has engaged her in vicious turf wars culminating in a fracas over grain donated by the Japanese as food aid. Allegations that huge 'samples' went 'AWOL' ended in the court of Asantehene for arbitration, after it was reported that Osafo Maafo is rather the villain who has to account for more sacks of the donation. Food aid falls directly under the purview of Mrs. Coleman, though Maafo hijacked it. (Osafo Maafo oversees an illegal 'terror' investigative unit headed by a disrespected man known to many within the ministries.) His hand-picked chief director is also another controversial side kick of the controversial former Governor of the Bank of Ghana, Dr. Kportufe Agama. When chaos reigned, Mr. Tsatsu Tsikata had a field day with foreign exchange to fund his strange schemes at GNPC. A similar case is brewing in the ministry where a deputy from the Northern Region is whining over instructions of his Minister over donation of bags of rice from the Italians for humanitarian reason. Chronicle is monitoring and would report on this. (They can run, but they can't hide from the Spear of The Nation). Mr. Osafo Maafo who is seen as famously wicked and brutal in his approach has been known to dig in violently to protect his turf and has been firing off serious letters all the place, even to the direction of the Minister of Economic Planning and Regional Integration, Dr. Kwesi Ndoum, against whom he has been waging his own brutal turf wars. It took the intervention of the President to still the wars and get the pair to work together as a team. It is not working. Now Mrs. Coleman is charged with forced labour, confiscating Owusuwaah's passport and visa in connection with forced labour, making a false statement to U.S. officials and visa fraud. The indictment continues that in February 2000, Coleman, working with Coleman-Blackwell, fraudulently obtained a U.S. visa for Owusuwaah by knowingly submitting a visa application with false information. The two also allegedly lied to an official at the U.S. Embassy in Ghana. According to the indictment, when Owusuwaah arrived in the United States in February 2000 Grace Coleman took her passport, and Coleman-Blackwell hid Owusuwaah's passport and visa to prevent her from leaving her Takoma Park home. The two women allegedly intimidated Owusuwaah into providing domestic labour and child care for little or no pay by threatening her with deportation. The maximum penalties Grace Coleman and Coleman-Blackwell could face, if convicted of all charges, are 20 years in prison and a $250,000 fine each. Kenneth Blackwell faces a maximum of 10 years in prison and a $250,000 fine, if convicted of all counts. Since the offence is personal, it appears that Mrs. Coleman who is also an MP would not have recourse to legal representation - normally very expensive, funded by the taxpayers.