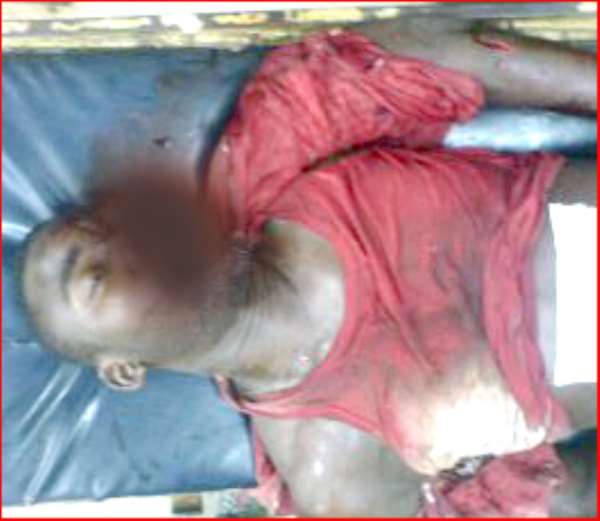 DONEE ATAKLI, a 26-year-old former student of the Takoradi Polytechnic (T-Poly), was killed at the Polytechnic Junction last Friday April 9, when an Infinity 4-wheel vehicle he was sitting in was crushed by a cargo truck with registration number WR 282 Q, allegedly belonging to Hannah Newman Cold Store in Takoradi.

Atakli, who was sitting at the right side of the vehicle with registration number GR 4413-10, sustained severe injuries and later died after he was denied prompt medical attention.

Narrating the incident, another young man called Mayor, who also rode in the vehicle, said at about 1:30am, four boys in the vehicle were traveling from Takoradi towards Effiakuma New Site.

Upon reaching the T-Poly junction, their driver slowed down to turn left towards New Site.

Suddenly, according to him, the cargo truck, traveling at top speed from Sekondi towards Takoradi, crashed into the right side of their vehicle where Atakli was sitting.

He said they all sustained injuries, but Atakli's was serious and was therefore rushed to the Effia-Nkwanta Hospital in a taxi.

He claimed that Atakli might have survived if the Effia-Nkwanta Regional Hospital had admitted him; but the authorities declined to do so, saying they were short of beds.

The victim was therefore sent to the Takoradi GHAPOHA Hospital, but the lights were off at the place, and subsequently, Atakli was driven to Takoradi Hospital.

There, the hospital personnel also declined to attend to Atakli, saying the case was too serious for them to handle, referring him back to Effia-Nkwanta Regional Hospital, where they had been earlier, but Atakli was sadly pronounced dead on arrival. He said the body of the deceased had been deposited at the Effia-Nkwanta morgue pending autopsy.