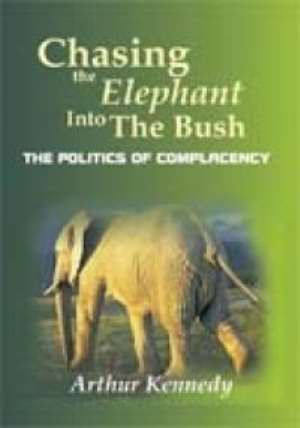 Over the last few weeks, the discussions on the so-called “Asante-Akyem rivalry” have intensified.

Despite my ardent desire to stay out of this non-productive debate, I am compelled to intervene because of the erroneous impression created by some of those involved in the debate, that my book “CHASING THE ELEPHANT INTO THE BUSH”, discussed that issue. This impression was re-enforced by an article authored by Eugene Antwi, which was widely circulated in the media and published in the “Daily Graphic” of 25 th March, 2010. The author quotes extensively from “CHASING THE ELEPHANT INTO THE BUSH” on my discussions with Dr. Richard Anane on the 2007 NPP Primaries. While he accurately reports my discussions with Dr. Anane, he implies that when Dr. Anane talked about the PFP and UNC wings of the party, he was discussing the “Asante-Akyem rivalry”. In his peroration, Mr. Antwi writes “Juxtaposing the Arthur Kennedy, Mike Adjei and the Africa Watch March 2010 edition, I am fully convinced that certain leading politicians from both the PFP/UNC sides keep moving the goalposts as they go along, and I urge them to take a cue from the pain and suffering upon Ghanaians in 1979, the division and its catastrophic effects unleashed upon the good people of Ghana by losing the 1979 elections.” While I am not privy to the motives of Mr. Antwi, the implications of this paragraph regarding conversation with Dr. Anane and my book are both false.

The truth is that my book never discussed the “Asante-Akyem rivalry”. Furthermore, while Dr. Anane may have views on the rivalry in question, he has NEVER discussed those views with me. When Dr Anane or others mention Danquah and Busia and their adherents, I do not presume that they are referring to Akyems and Asantes respectively. That would be illogical since Dr.   Busia was not Asante but a Bono.

It may be that those obsessed with this debate have not considered its impact on the rest of us who are proud NPP members but neither Akyems nor Asantes. The futile discussion about this supposed rivalry creates the unfortunate impression that Asantes and Akyems matter more in our great party than the rest of us and that the rest of us are second-class party members.   Furthermore, it is insulting to people who are not Asantes or Akyems and have won leadership positions when we consider them as mere pawns for Asantes and Akyems. The Fantis, Dagombas, Gas and all the other Ghanaians who belong to this party are indispensable to our success and we must avoid the temptation to make them feel devalued.   Asantes and Akyems alone cannot win elections. Indeed, as I state in “CHASING THE ELEPHANT INTO THE BUSH”, all of us, kukrudites, united, are not enough to win elections on our own. We need floating voters and regions as well as discerning and patriotic NDC members who are prepared to put Ghana ahead of their party for victories in 2012 and beyond.

While some of our best minds spend valuable time discoursing on the intricacies of this so-called rivalry which has been manufactured and fanned by our enemies to divide us, important work lies undone.

From the rule of law to our freedom of expression to the protections of private property, the NDC is committing one outrage after another while we quarrel amongst ourselves.

From education to job creation, the NDC's team B or C appears confused while we make up our minds about whether there is a useless rivalry between Asantes and Akyems or not.

From putting money in the pockets of Ghanaians to reducing the price of petrol, the NDC is breaking promise upon promise while we quarrel on who said what when in some bygone days without the time to hold them to account for their betrayal of Ghanaians.

As former U.S. President Clinton is wont to say, elections are always about the future, not the past. Those who think the settling of some ancient feud or rivalry will win us elections in today's Ghana are mistaken.

My fellow Kukrudites, Eugene Antwi was right when he urged us to remember the suffering visited on Ghanaians following our 1979 divisions and unite. But he is urging us to look too far back.

We need not look as far back as 1979. We must look at what is happening now and unite for the cause of Ghana.

Let us stop the useless arguments and get to work, for Ghana.

Ghana demands it and our principles require it. As US President Obama put it “We are the men we have been waiting for.”

Let us, even while we vigorously point out the gross incompetence and outrages of the NDC, begin to lay out a vision and an agenda for building the Ghana that we all dream of--- the “Better Ghana “that we can leave our children with pride.

We know that if the NDC had a hundred years in power, they will be unable to leave a better Ghana.

Let us fight, not with one another, but for Ghana
Arthur Kobina Kennedy