JJ and His Misguided Quest for Justice 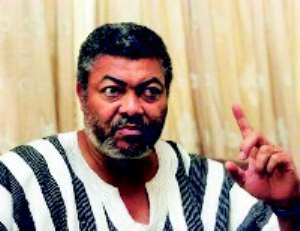 I shall return to Justice presently but let us begin with reconciliation between Presidents Rawlings and Kufuor. While I commend the Asantehene and others like him for their efforts towards reconciling the two former Presidents, I think too much effort is being expended on that issue. In truth, Ghana will do just fine with the two former Presidents living their separate lives. The fact that Rawlings and Kufuor will not meet occasionally to eat “fufu na abenkwan” or “yoke gari” washed down with palm-wine or ogogro and discuss the affairs of the nation while doing so will not matter one bit. In the early days of the American republic, John Adams and Thomas Jefferson, who followed him into the Presidency, were bitter enemies and yet the Republic grew from strength to strength. In the early days of Israel, Ben Gurion and Menachem Begin, who both served as Prime Ministers, were bitter enemies and yet, Israel did just fine. In South Africa, Mandela and de Klerk were not friends but South Africa made the transition from Apartheid to democracy just fine. The efforts expended towards reconciling the two former Presidents will better be spent reconciling ethnic groups and faiths.

Justice is obviously a very important issue in a democracy and former President Rawlings desire for it should be given serious attention. Since he burst onto the nation's political scene three decades ago, Mr. Rawlings has been closely linked to Justice --- or Injustice, depending on one's point of view. Justice is important for a number of reasons.

It is central to any democracy.
Our nation's motto is “Freedom and Justice.”
Our constitution guarantees Justice for all Ghanaians regardless of our political or religious believes.

Unfortunately for Justice, President Rawlings has significant credibility issues as an advocate for Justice. In 1992, facing the possibility of losing power, President Rawlings inserted protections for himself and his PNDC accomplices into the constitution. Forced to choose between Justice for the PNDC operatives and peace for Ghana, Ghanaians decided to choose peace and move on. The question is, If Mr. Rawlings believes in justice so passionately, why did he shield himself from justice? The bible teaches us to pray “Forgive us our trespasses as we forgive those that trespass against us.” We cannot insist on forgiveness for ourselves even as we pursue Justice for others. As every lawyer knows, he who pursues equity must come with clean hands. Therefore, today let the call go forth to President Rawlings that if he is committed to justice, he must renounce the protections contained in the 1992 constitution. If he cannot do so, then he must forever hold his peace. If he does, then I suggest that since the 1979 coup punished coup-makers and corruption, we start from 31 st December, 1981 in our quest for Justice.

Here is my list of significant issues around which we can pursue Justice, for victims, perpetrators and the country:

- The Abuses of the Curfew imposed after the 1981 coup
- The 1982 murder of the 3 judges and the retired army officer
- The divestiture of public Corporations and whether some benefited unfairly at the nation's expense
- The 1994-95 Guinea Fowl war that left 2000 dead and over 100 thousand refugees in the Northern region, together with the Dagbon crisis that left about 50 dead
- The disturbances in the north after the 2004 elections in the North and the deaths of Mobila and the Kumbungu three who were beheaded.
- The M and J as well as SCANCEM bribery allegations
- The 1995 “Kumi Preko” demonstrations
- The murder of the 18 women in Greater Accra between 1998 and 2000.
- The Operations of the GNPC since 1993.
- The violence in the 2008 elections

If we can solve these problems, I say, let Justice flow so that Mr. Rawlings will get his day, in court or on the gallows.

Of course, while we spend all our limited energies on cycles of revenge and vilification, our nation's business will remain undone.

But we need not go down that path—the path of Rawlings. We can look to the great moments of reconciliation in history and follow their example. On March 4 th , 1865, after four years of a war that had set brother against brother, caused many deaths and bitterly divided America, President. Lincoln sought to reconcile his nation in an inaugural address that has become a classic in reconciliation. Declared Mr. Lincoln, in a speech that immortalized him more than his assassination a few days later “With malice toward none, with charity for all, with firmness in the right as God gives us to see the right, let us strive on to finish the work we are in, to bind up the nation's wounds, to care for him who shall have borne the battle and for his widow and his orphan, to do all which may achieve and cherish a just and peace amongst ourselves and with all nations.”

Nearly a hundred a thirty years later, Lincoln was echoed most powerfully by a man whose generosity challenges all the petty seekers of revenge to do better. Nelson Mandela had been in prison for nearly three decades. But on April 4 th , 1994, in a spirit that would gladden the heart of Jesus, Mr. Mandela breathed life into South Africa in an inaugural address that moved the souls of all mankind.

Said Mr. Mandela simply
“The time for the healing of the wounds has come.
The moment to bridge the chasms that divide us has come.
The time to build is upon us.”

That is the spirit of nation-builders that we must emulate. Is Mr. Rawlings more virtuous that Mandela? Has he been wronged more than Mr. Mandela? If Mr. Mandela could forgive the actual crimes against him, his people and mankind, why can't Mr. Rawlings forgive his imagined slights?

My fellow Ghanaians, let us listen to the voices of Lincoln and Mandela, not Rawlings.

Let us build our nation, together, in Justice and in peace. Let us emplace institutions that will ensure justice for our people moving forward.

That is the justice we must pursue vigorously.


Let us move forward, together.