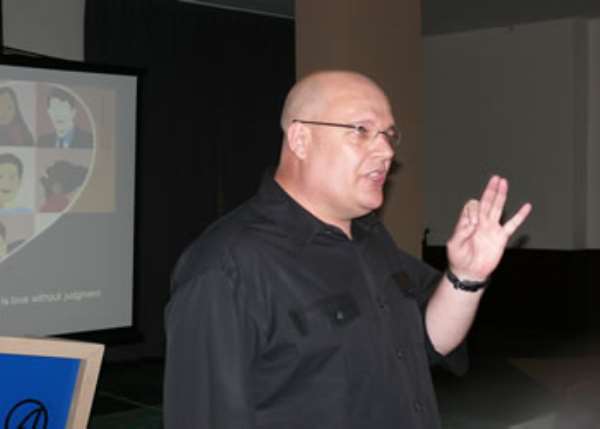 What would you do if you took Intelligence Quotient (IQ) test and you were told you scored .94 which means you are not only stupid but incapable of operating in a normal environment. Will you pass your exams and respond positively to given assignments?

What if a second test scores you .142 meaning you are one of the world's most intelligent people and you are told that the first test that scored you .74 was not correct and that some errors led to the poor marks you got? Will your performance in class change?

Well, this is the story of renowned South African motivational speaker, Rinus Le Roux, who told rib-cracking jokes about how he, a declared stupid person was by the stroke of pen declared as being amongst the world's most intelligent persons.

Giving a talk hinged on Living a Meaningful Life, sponsored by telecommunications giant MTN , Mr Le Roux recounted religious teachings that “as you think, so shall you be, and if you think it is impossible, it will be impossible, if you think you cannot, you never will, it is about the self confidence we carry in our hearts and in our minds, that is what makes the difference.

He said with an IQ of .142, he was still failing his exam. He had to change the way he thought to experience a shift from being stupid to being clever.

He said human beings can create meaning for themselves in life by striving to be alchemies - “Someone in the 11th century who could take led and iron and transform it into gold, and that is how we create meaning.”

Given the debilitating problems African nations are grappling with, the people, he contended needed alchemists – people who will transform the nations and provide hope for the people.

Be a transformational person


A section of the audience

Mr Le Roux told his audience of the dark clouds of fear, anxiety and uncertainty that gripped White communities in South Africa when Nelson Mandela was released from prison.

“When Mr Mandela was released, my community was so fearful, they said we 'gonna' have a war. My parents stocked up bully beef and bottled water (enough to last the family for some time in the event of a war) because they thought we were going to have a war. Mr Mandela came out and said no, there is no going to be a war, 'I will show you how to transform'” the simmering tensions and pent up anger in the country into something more productive.

He said whenever we transform something or a situation, we ourselves become the first beneficiaries because we feel great about ourselves, “so every time you face a problem, there is the opportunity to go beyond the problem and to create for yourself meaning in your life, to feel that you are more significant in your life.”

How does one make a meaning in one's life? Le Roux says there are three ingredients to becoming a meaning maker which include realizing there is always a choice and always believing in possibility.

For him, if you can't change a nagging situation, change the way you think about it. Illustrating this with an example, he cited an all familiar example of commercial bus drivers who stop in the middle of the road to drop and pick passengers. According to him, he used to get mad at them but noticed at a point that once he could not stop them, he decided to stop himself from getting angry at them.

On believing in possibilities, Le Roux counselled against allowing others to tell you whether it is possible or not. You must be willing to say it is possible, he said.

The event brought together sports personalities and broadcasters such as Satellites' Coach Sellas Tetteh, GTV's Kwabena Yeboah, Joy FM's Kojo Oppong-Nkrumah, and Azigiza Junior, who had a good laugh throughout Le Roux's presentation.