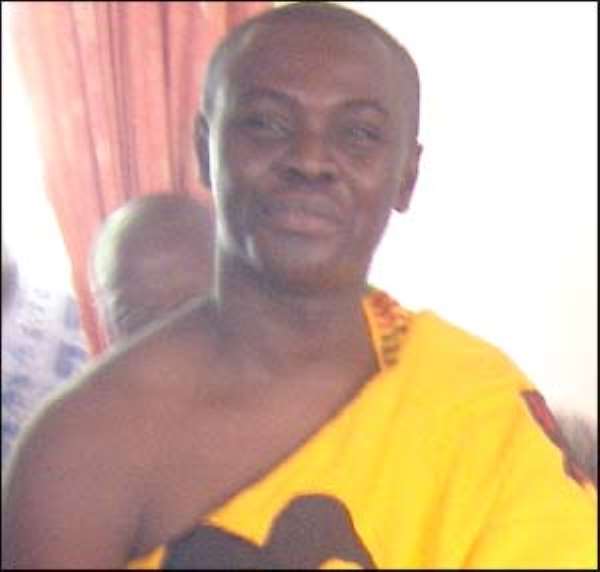 THE DORMAAHENE, Osagyefo Oseadeyo Agyemang Badu II, has described as 'unfortunate' and 'a mere rhetoric' an ultimatum issued by the Sunyanihene for the immediate closure of the Dormaa Stool Lands Secretariat situated in the Central Business District of Sunyani following disputes over common boundaries.

“We deem the Sunyanihene's ultimatum to close down the office a mere rhetoric,” Nana Agyemang Badu emphatically stated when addressing a section of the press at his Abrampedease Palace in Dormaa Ahenkro on December 31, 2009. This was in reaction to a series of allegations leveled against him by the Sunyanihene, Nana Bosoma Asor Nkrawiri II, at a press conference held on December 14, 2009 in Sunyani.

Nana Agyemang Badu said the entire members of the Dormaa Traditional Council “consider the utterances, accusations and threats of Sunyanihene as not only unfortunate but total falsehood calculated to distort historical facts to attract undue public sympathy to the detriment of the long-existing, peace-loving and law-abiding Dormaa State.”

According to Nana Agyemang Badu who is also the President of the Dormaa Traditional Council, the Council, at its end of year meeting, unanimously decided to rename the building which houses the disputed Dormaa Stool Lands Secretariat in Sunyani as 'Aduana House' with effect from 1st January 2010, an indication that he and his people are poised for action and are ever prepared to bear the consequences of the ultimatum which apparently elapsed on 31st December, 2009.

The Dormaahene did not see anything wrong with the sitting of an office outside ones own land to undertake genuine business, saying, “even granting that the office is located on Sunyani Stool Land, there is hardly any restriction that prevents the operations of a lawfully established office in any part of the country from providing legitimate services to the general public-Sunyani being no exception.”

Earlier at the Sunyanihene's press conference, Nana Bosoma Nkrawiri accused the Dormaahene of encroachment on Sunyani lands and selling them indiscriminately, employing the services of landguards to harass and torment land and property owners in the municipality, whilst giving the Dormaahene up to the end of 2009 to remove an office that belongs to the Dormaa Stool Land in the city.

However, Nana Agyemang Badu has vehemently refuted the Sunyanihene's allegations, expressing shock and dismay at the manner Nana Bosoma Nkrawiri has conducted himself by resorting to the media to seek redress.

“As a fellow custodian of our treasured customs and tradition, one would have expected the Sunyanihene in the first instance to have acted with decorum by resorting to our traditional means of seeking redress in matters of this nature involving two traditional areas,” he stated.

Nana Agyemang Badu further explained he does not share any common boundary with Sunyanihene but with the Domasehene since time immemorial.

He said the Dormaa State boundary with the Domase Stool is marked by the Gubre Stream (found within the municipality) which flows into the Bisi Stream and far beyond.

Meanwhile, Osagyefo Oseadeyo Agyemang Badu II, has presented GH¢10,500 financial package to more than 71 students in second cycle and tertiary institutions for the 2009/2010 academic year through the Dormaaman Educational Endowment Fund (DORMEEF). The financial assistance is targeted at needy but brilliant students who hail from the area to enable them pursue their academic career.