IS NANA KONADU RAWLINGS A MEMBER OF THE NATIONAL DEMOCRATIC CONGRESS? 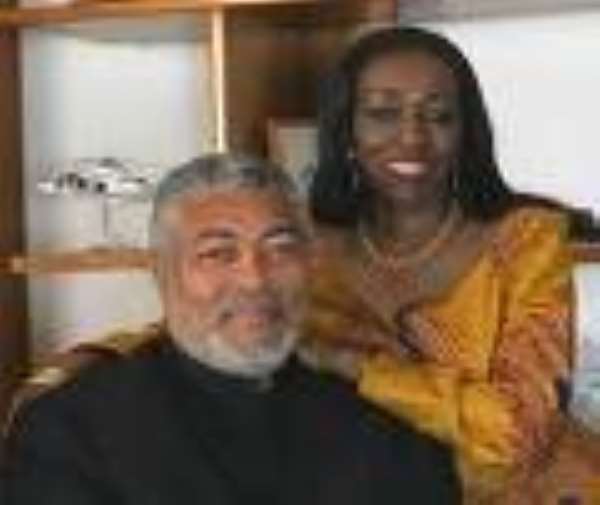 My question is not a deviation it is the exact question I want to ask about the membership of Mrs Rawlings of the party the husband gave birth to. I am compelled to ask this question following some violations and misconduct of the former first Lady of Ghana in relation to some directives of the National Democratic Congress (NDC).

She has in the past couple of months conducted her self in a way that gives the impression that she is living a world different from the world of the NDC party. The rate at which she has dishonoured most directives of the NDC is very alarming and appalling to say the least.

Firstly, the national chairman of the NDC had requested that, all members of the party who have grievances on any issue(s) against the party or the government of President Mills should use the grievance procedures of the party and not the media in the wake of the Spio Garbrah “pissing in” article which was published in the media.

Surprisingly, this directive of the NDC party was violated by Nana Konadu on countless occasions. She has been heard on countless instances attacking the government of President Mills contrary to the directives of the NDC to its members to use internal party structures and not the media to address their concerns. The question to ask is, if she is a member of the NDC why did she, and still violating the directives of the party? I am of the opinion that, because she is not a member of the NDC is that why her gross violation of party directives has not attracted the rage of the party.

The greatest paradox of all these violations is that, the former first lady is contesting for a position which according to the NDC is non-existent! If she is a member of the NDC and committed to it, knowing its constitution very well why should she be unaware that, the position of first vice chair-person was not a position in the NDC party? In other words does she want to create such a position for her self? I am asking these questions because inspite of violating the directives of the party and being made aware that, the position she is campaigning to be elected into does not exist she still remains defiant and continuing with her campaign!

I have this feeling that, Nana Konadu wants to stage a coup in the NDC and must therefore be watched 24/7.

At least I have attempted explaining why I think Nana Konadu is not a member of the NDC. However, let us assume without admitting that, she is a member of the NDC and ask the following questions, why is the leadership of the NDC unable to reprimand her for grossly violating party rules and directives?

If she is in actual fact a member of the NDC then she must be dragged to the disciplinary committee of the party to answer some questions and if possible receive suspension from the party for gross misconduct.

If she is not untouchable in the NDC then the principle of what is good or bad for the goose must equally be good or bad for the gander. If action is not taken against her the NDC should not be surprised if in future defiant members of the party use her behaviour to justify violations of party rules.

I rest my case here while waiting for the answer to the question, Is Konadu Rawlings a member of the NDC?