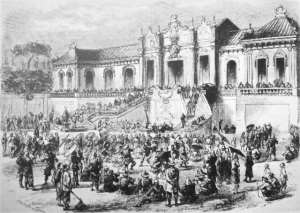 "Two robbers breaking into a museum, devastating, looting and burning, leaving laughing hand-in-hand with their bags full of treasures; one of the robbers is called France and the other Britain." Victor Hugo. (1)

China has announced its intention of sending groups of researchers to various museums in the West, especially France, Britain and United States, such as the British Museum and the Victoria and Albert Museum to draw a list of the artefacts that were looted in 1860 during the Anglo-French invasion of Beijing, (then Peking).(2) Victor Hugo had expressed the wish and the hope that one day France and Britain would return the looted objects taken from an Asian country, thousands of miles away from France and Britain, that had been attacked because of its resistance to European imperialism. (3)

What I found interesting in the reports on the announcement of Chinese intentions was that many did not find it necessary to raise the obvious and most elementary question: How come that China now has to send teams of researchers to prepare such a catalogue? Do the great “universal museums”

not already have lists of items looted from Beijing? Nobody expects wild and marauding Anglo-French troops to make a list of the objects they looted even though such expeditions, as we know, were usually carefully prepared and included archaeologists and other experts who advised the marauding armies on what to take. But what have the Western museums been doing in the hundred and fifty years since the aggressive attack? Do they not have catalogues or inventories of what they hold?

What is known though is that the so-called “universal museum” are very reluctant to inform the public about the exact number of looted objects they have. We have often remarked that in the case of the Benin Bronzes which were looted by the British in the so-called Punitive Expedition of 1897, the museums have not been very enthusiastic to tell us how many of the bronzes are in their possession even though the British Museum has been know to be selling the Bronzes for profit.(4) So how are the museums to inform and educate the public about other cultures if they are not even in a position or willing to inform about the number of objects they have from a particular culture? Can a museum really educate the public when its officials do not know what they have? But is this state of affairs accidental? 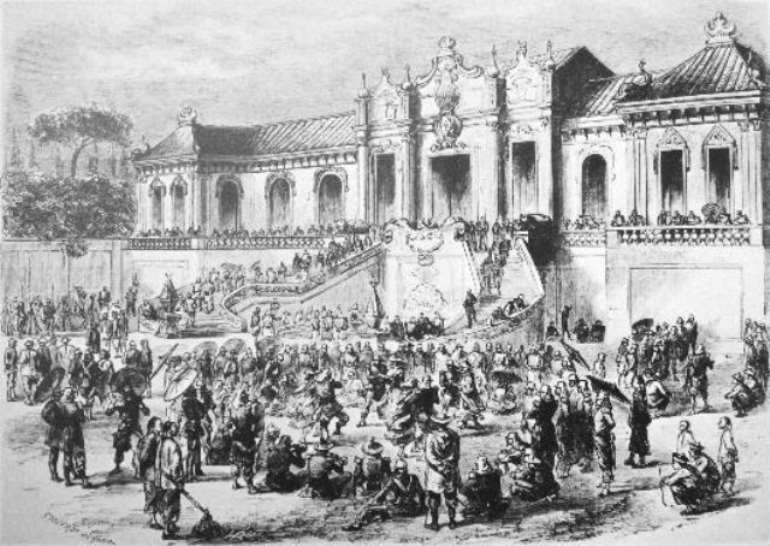 Many of these museums have their own priorities and do not consider the preparation of inventories of looted foreign objects as important enough to merit a catalogue, even though this might be a way of educating the public about foreign cultures. We would have thought that those museums pretending to serve all mankind would do this as a matter of course. We do not have anywhere, not even from the British Museum or from the Ethnologisches Museum, Berlin, a complete catalogue of the Benin Bronzes in their possession. There is of course the permanent worry about restitution demands and hence the tendency not to reveal too much about such foreign objects. The morality here is sometimes very close to that of highway robbers. The objects are of course shown from time to time in spectacular exhibitions but no complete view is ever presented to the public.

Cuno, Montebello and their supporters complain that restrictions by foreign States are making it difficult, if not impossible, for the Western museums to acquire more artefacts. (5) Yet it has become clear that these museums have far too many objects and are experiencing problems of space.

We have heard a lot about digitalization which should make it possible to view what the museums are holding from Beijing or Bolgatanga. But does anyone believe this fairy tale when the museums do not even know the number of objects in their possession? We have not been able to see at their homepages

all the looted Benin objects these museums hold. All the above should lead to serious questions about the management and management style of the museums. At a time when Parliaments are being asked to account for every penny spent and bank managers are under close scrutiny about their funds, nobody seems to worry that some museums do not even know what they have or at any rate are not prepared to inform the public about the exact number of objects under their control and how they acquired them. The question of provenance is considered a rather sensitive question by many Western museums. Is this the kind of management that we would accept from serious organizations?

The Chinese researchers are no doubt aware that they might not be able to see all the looted Chinese objects these museums are holding for the simple reason that the museums have not organized these objects in a systematic way but above all, that there is a great fear of possible subsequent restitution claims when the existence and location of looted objects are firmly established.

The director of the British Museum recently stated, with respect to the Parthenon/Elgin Marbles, that the location of objects is no longer important in this digital age but we are sure that he did not mean he is indifferent as to whether the Chinese objects looted in 1860 are in Beijing or in London.

Recent discussions surrounding the sale of the looted Chinese bronze rat head and the rabbit head which were sold in Paris give a good indication of the attitudes still prevailing in the West about the looted Chinese cultural artefacts. 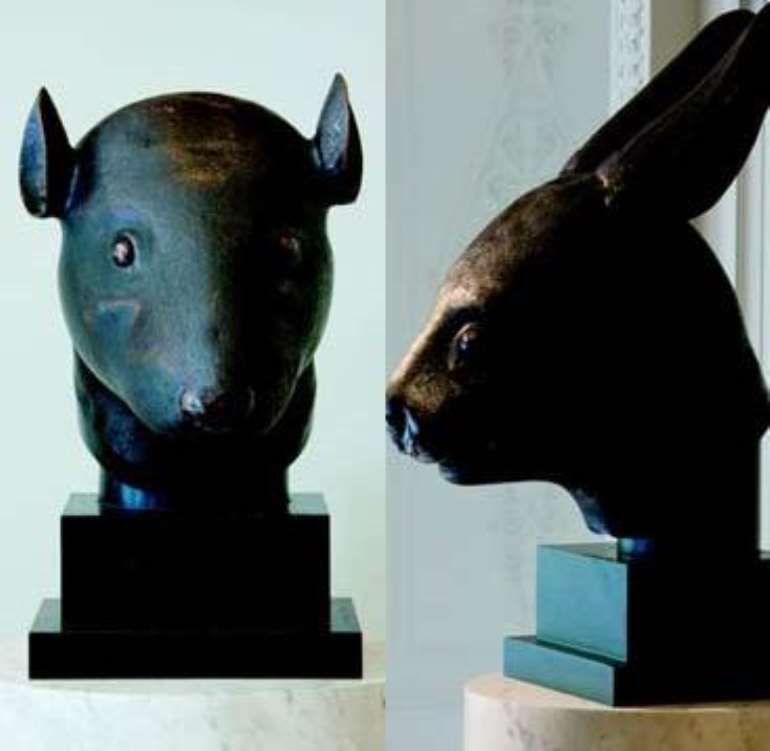 These sculptures of a rat head and a rabbit head were among the objects looted in 1860 when French and British soldiers under the command of Lord Elgin sacked the imperial palace. The eighth Lord Elgin was the son of the seventh Lord Elgin, who removed the Parthenon Marbles from Athens.

With China, Egypt, Greece, Italy, Nigeria and other States knocking loudly at the doors of the so-called “universal museums” for the recovery of some of their looted cultural artefacts, some solution will have to be found to remove this persistent irritation and block to harmonious international relations.

True development of mankind must surely mean that cultural objects looted in an age of unbridled imperialism and violence must be returned in a period when such forcible actions in foreign lands are no longer accepted as marks of civilization but are deplored as violations of International Law and United Nations resolutions. Will the present Western States set a better example or shamefacedly confirm the rapacious violent behaviour of their predecessors which brought them enormous wealth, profit and prestige? Will they finally hear Victor Hugo's plea?

“I hope that a day will come when France, delivered and cleansed, will return this booty to despoiled China”. Victor Hugo

http://www.timesonline.co.uk 3. Kwame Opoku, “Is it not time to fulfil Victor Hugo's Wish? Comments on Chinese Claim to Looted Chinese Artefacts on Sale at Christie's”. http://www.modernghana.com

ANNEX The sack of the summer palace (UNESCO Courier, Nov, 1985) by Victor Hugo The sack of the Summer Palace To Captain Butler Hauteville House, 25 November, 1861 You ask my opinion, Sir, about the China expedition. You consider this expedition to be honourable and glorious, and you have the kindness to attach some consideration to my feelings; according to you, the China expedition, carried out jointly under the flags of Queen Victoria and the Emperor Napoleon, is a glory to be shared between France and England, and you wish to know how much approval I feel I can give to this English and French victory.

Since you wish to know my opinion, here it is: There was, in a corner of the world, a wonder of the world; this wonder was called the Summer Palace. Art has two principles, the Idea, which produces European art, and the Chimera, which produces oriental art. The Summer Palace was to chimerical art what the Parthenon is to ideal art. All that can be begotten of the imagination of an almost extra-human people was there. It was not a single, unique work like the Parthenon. It was a kind of enormous model of the chimera, if the chimera can have a model. Imagine some inexpressible construction, something like a lunar building, and you will have the Summer Palace. Build a dream with marble, jade, bronze and porcelain, frame it with cedar wood, cover it with precious stones, drape it with silk, make it here a sanctuary, there a harem, elsewhere a citadel, put gods there, and monsters, varnish it, enamel it, gild it, paint it, have architects who are poets build the thousand and one dreams of the thousand and one nights, add gardens, basins, gushing water and foam, swans, ibis, peacocks, suppose in a word a sort of dazzling cavern of human fantasy with the face of a temple and palace, such was this building. The slow work of generations had been necessary to create it. This edifice, as enormous as a city, had been built by the centuries, for whom? For the peoples. For the work of time belongs to man. Artists, poets and philosophers knew the Summer Palace; Voltaire talks of it. People spoke of the Parthenon in Greece, the pyramids in Egypt, the Coliseum in Rome, Notre-Dame in Paris, the Summer Palace in the Orient. If people did not see it they imagined it. It was a kind of tremendous unknown masterpiece, glimpsed from the distance in a kind of twilight, like a silhouette of the civilization of Asia on the horizon of the civilization of Europe.

This wonder has disappeared. One day two bandits entered the Summer Palace. One plundered, the other burned. Victory can be a thieving woman, or so it seems. The devastation of the Summer Palace was accomplished by the two victors acting jointly. Mixed up in all this is the name of Elgin, which inevitably calls to mind the Parthenon. What was done to the Parthenon was done to the Summer Palace, more thoroughly and better, so that nothing of it should be left. All the treasures of all our cathedrals put together could not equal this formidable and splendid museum of the Orient. It contained not only masterpieces of art, but masses of jewelry. What a great exploit, what a windfall! One of the two victors filled his pockets; when the other saw this he filled his coffers. And back they came to Europe, arm in arm, laughing away. Such is the story of the two bandits.

We Europeans are the civilized ones, and for us the Chinese are the barbarians. This is what civilization has done to barbarism.

Before history, one of the two bandits will be called France; the other will be called England. But I protest, and I thank you for giving me the opportunity! the crimes of those who lead are not the fault of those who are led; Governments are sometimes bandits, peoples never.

The French empire has pocketed half of this victory, and today with a kind of proprietorial naivety it displays the splendid bric-a-brac of the Summer Palace. I hope that a day will come when France, delivered and cleansed, will return this booty to despoiled China.

Meanwhile, there is a theft and two thieves. I take note. This, Sir, is how much approval I give to the China expedition.

Photo: Occupation of the Yuanmingyuan or summer palace by British and French troops in 1860, before the palace was destroyed by fire. This imperial residence was situated on Lake Kunming, northwest of Beijing.

The author has 262 publications published on Modern Ghana.