Ghana home dry: Obama is gone but no Investment 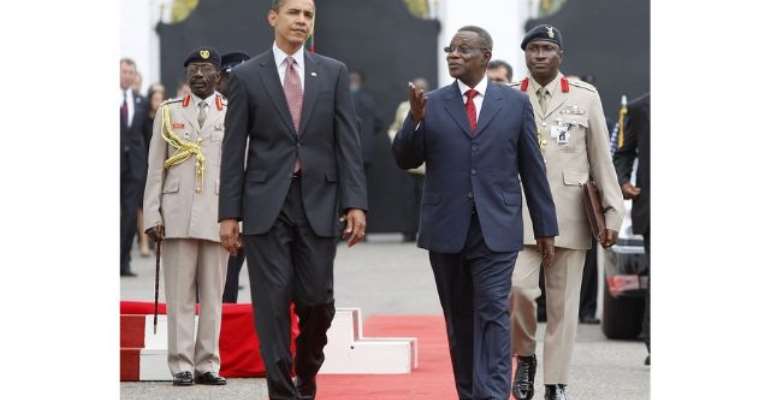 High expectation of Ghanaians for economic transformation after the visit of President Barack Hussein Obama is dwindling as economic condition deteriorates. A survey by the Ghanaian Journal tells a rather dejected and demoralized Ghanaian, thinking that the euphoria that realised during the visit of the world richest country first family could commensurate an economic turnaround.

Indeed that could happen if our leaders reverse their self seeking interest and work towards providing what could attract investment into the country.

Last Monday Mr. George Kenneth Butterfield, Vice Chairman of the Sub-Committee Commerce, Trade and Consumer Protection, leader of a seven member US Congressional delegate to Ghana expressed regrets to the low level of American investment in the country especially from the Private Sector business in America.

Mr Butterfield said out of the 350 million people living in the US, about 35 million were of African descent, and announced that the Obama Administration was poised to take the American Government and the African continent and the rest of the world into a brand new direction.

However in an Interview with Mr Francois Baird, CEO of Baird's CMC and a member of the U.S. Chamber of Commerce, was not surprised to the american investment famine into Ghana.

President Obama visit to Ghana and Hilary Clinton completed tour of Africa should have at least spearheaded talks amongs business but rather the situations seem the same.

Mr. Baird said several reasons like a promised return from Africa was not commensurate with the risks other continents, countries, and regions offer, and U.S. executives view Africa as needing excessive work to be an attractive investment choice

He said Corporate America has stated categorically that Africa must invest in the health and education of the African people to create a large pool of skilled and productive human resources, invest in and maintain infrastructure—transportation, communications, electricity, and security—so that there will be a reliable society in which to operate, build a functioning legal system to ensure the rule of law, transparency, and fair play, create a positive climate for foreign investments by reducing bureaucratic processes, eliminating corruption, and reforming tax systems, irrespective of country of origin and ensure stable political environments that may or may not be based on Western democratic principles.

“In addition, countries and regions in Africa need to sell themselves more aggressively to corporate America. But even if Africa learns to better market itself to U.S. businesses, investors will hesitate because Africa is regularly portrayed in the media as unstable and violent”.

He said recently a study undertaken by the US chamber of Commerce revealed that until the overall picture stabilizes, most African nations will find it tough to attract FDI. He said Corporate America named countries like Morocco and Egypt and sub-Saharan countries like South Africa and Nigeria, with proven business potential that can attract some investment.

“However, the investment jury is still out even for these countries, therefore, African government and business leaders should decide how best to overcome the impediments—both real and perceived—to U.S. corporate investment”.

Reacting to factors that influence U.S. corporations to invest in Africa, he classified Rule of law, a strong point since according to him does not prevail to the degree required to make Africa an attractive investment.

According to him, Ghana does not offer a sufficiently large middle class of consumers or show consistent economic growth that could promise a future market.

“However, most African countries are small and have poor markets, and there are barriers to regional markets—such as taxes and the freedom of movement of people and goods. However, Africa does offer enormous natural resources and that is an attraction”.

Risks versus rewards are another factor U.S. corporation's look at. Given the currently perceived risks in Ghana, the rewards have to be very high to make it worthwhile to invest. Presently, U.S. corporations say that there are very few visible promises of high future returns to justify significant interest in investing.

Overall, U.S. businesses do not view Ghana as an attractive place to invest. The image of lawlessness, corruption, an inadequate infrastructure, uneducated or untrained people, and an unwelcoming government attitude toward business serve as major deterrents.

however with Ghana striking oil, the attention or focus might change, but then in other for Ghanaians to benefit immensely, leaders should put proper laws to regulate the oil and gas sector or else” he concluded.

Politics
Powered By Modern Ghana
If You’re Not Into Cashew, Get A Land And Begin Cultivating; It'll Be A Prosperous Venture Under Me — Mahama
Teachers, Nurses, Bankers, Soldiers, Traders Everyone Join Us Vote For Mahama — Riders Declare ‘Get Okada Votes’ Campaign
We Won’t Allow EC To Disenfranchise Any Voter – Ashaiman MP
C/R: Help Us Win To Serve You Better — Jane Naana Woo Drivers, Traders, Residents In Elmina
First Lady Rallies For ‘Four More For Nana’
Election 2020: Massive Missing Of Names In Voter Roll Show EC Is Unprepared – Inusah Fuseini
Akufo-Addo Is Fighting Corruption Fighters – Mahama
I Moved The Economy From 41.6b To 54.5b In Four Years – Mahama
Why Implement Policies Of An ‘Incompetent’ Leader? – Former Agric Minister Quizzes Akufo-Addo
COVID-19 Updates Live Dashboard
TOP STORIES

If You’re Not Into Cashew, Get A Land And Begin Cultivating;...
53 minutes ago