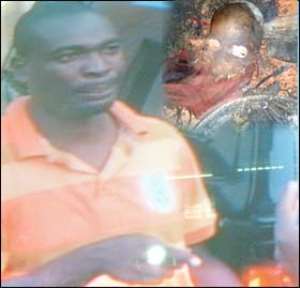 INFORMATION TRICKLING in from Aflao, the home-base of , the famous businessman who was arrested together with his errand boy for possessing two human skulls, indicates that the release of the suspect has generated panic and anxiety among residents of the area.

DAILY GUIDE sources in the area confirmed that barely two weeks after the Ho High Court presided over by Justice Essel Mensah granted the accused person bail, residents of the border town were yet to recover from the shock that greeted them.

Reports indicate that the joyous moment that characterized information about the arrest and subsequent remand of Akpalu, who is alleged to have threatened to kill several people in the area, including a National Security operative with 'juju', abruptly evaporated, as Holy FM, a local radio station, broke the news about his release.

The release of the accused is likely to mar the political fortunes of the ruling National Democratic Congress (NDC) in the area which is noted as one of its strongholds, as some people have begun giving a political colour to the issue, with appeals to “the powers that be” to intervene or they would vote against the party in the 2010 polls, according to sources who monitored the local radio station.

Fuming contributors and callers to the radio station, DAILY GUIDE was told, could not hide their discontentment with the return of the affluent clearing agent suspected to be a ritualist, as some of them expressed fears about their security, knowing that the man whose arrest made them heave a sigh of relieve is back in town.

Some of the residents called for the demolition of the idol found upon a search of Akpalu's house, which contained the two human skulls while concerns were also rife about the dangers associated with the items that were connected to the skulls.

Reports suggest that one of the human skulls, tied in red cloth, had several padlocks numbering about 30 locked onto it in chains whilst the other was placed in a pot with palm oil and particles believed to be food.

About 56 knives were also stuck into the skulls.

However, there are widespread speculations in the area that these items have their spiritual implications and if care is not taken and the necessary rituals performed to destroy them, many people would continue to suffer spiritual attacks from the owner.

There are also concerns that the 30 padlocks locked onto one of the human skulls meant that such a number of people have been spiritually bounded by the owner, and unless the keys are found to unlock them, the victims would continue to wallow in spiritual bondage.

Akpalu, the 30-year-old businessman, was arrested alongside his 14-year-old errand boy, Alex Attoh, two weeks ago at Aflao, after he (Akpalu) allegedly threatened to kill a National Security operative with “juju”, thus prompting a search of his house at Rainbow, a suburb of Aflao, by a combined Police team, where the human skulls were discovered.

They were however granted bail later by a Ho High Court, following the intervention of a renowned lawyer and politician, Captain (Rtd) Kwame Nkrabea Effah-Dartey, who argued that the charges leveled against his clients are bailable and that Akpalu's track record showed that he is a successful businessman and has no dented image as far as crime is concern.