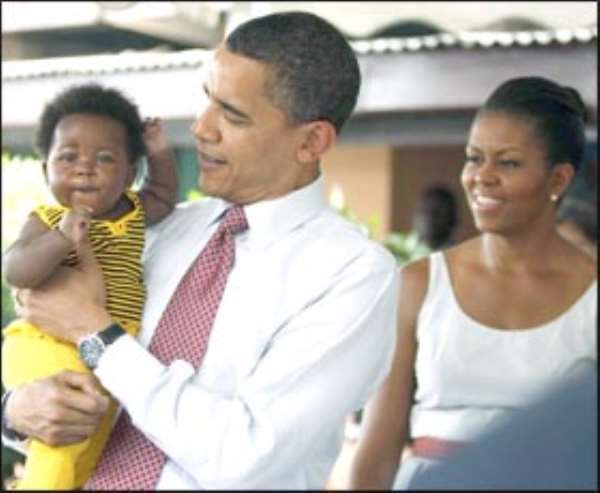 As contemplated the human capacity for evil during a tour of the Cape Coast Castle last Saturday, the US First Lady visualized the agony of her great-great grandfather while he waited to be transported to America as a slave.

Michelle LaVaughn Robinson Obama's great-great grandfather had told his family that the last point they arrived at before being shipped to Virginia, USA as slaves, was the British Cape Coast Castle.

This was disclosed to DAILY GUIDE in an exclusive interview with Hon. Fritz Baffour, Member of Parliament (MP) for South Ablekuma  Constituency, who acted as a tour guide to the US First Couple.

He said President Obama's mother-in-law, Mrs. Robinson, was the most emotional during the tour of the old slave post last Saturday.

He noted that even though the Obamas  were unable to locate the exact part of Ghana or West Africa their ancestor came from, “the Obama family was visibly touched in body language” during the tour.

Mrs. Marian Robinson, Michelle Obama's mother, was very emotional when she reached the 'Door of No Return' at the Cape Coast Castle in the Central Region of Ghana.

Mrs. Robinson, whose great grandfather was among the slaves who were transported from the shores of Cape Coast to Virginia, could not hide her feelings when she recollected the pains African Americans in the diaspora went through since they were taken from their original homes.

As a senior citizen of the black community that experienced the darkest part of segregation in American history, she was emotionally the most affected person among the Obama family who visited the Cape Coast Castle on Saturday.

Michelle and her husband were also visibly hurt about how Africans were treated during the Trans-African Slave Trade, as their presence at the Castle was a first hand education.

The emotional tour of the Cape Coast Castle, which took the Obamas over two hours, was to enable his wife, Michelle, and children, Malia and Sasha, to reconnect with their roots.

President Obama described his Castle tour as a tragedy and triumph, saying that it was important for his two daughters, Malia and Sasha, who were learning about their history.

They toured the castle's forecourt, yard and graves, male and female dungeons, castle ramparts with cannons overlooking the ocean, the tunnels to the beach, 'Door Of No Return', and the male condemned cells.

The Obama family laid flowers at the castle in memory of their ancestors who were victims of the evil slave trade.

According to Fritz Baffour, “For Michelle Obama, the trip was an educational boost for the children who had never been to Africa but knew their ancestors were brought in as slaves to work on America's sugarcane farms centuries ago.

“Michelle expressed the wish to come back to explore other slave routes should the opportunity arise,” he said.

According to him, although Sasha, 8, was too young to understand what was happening around her, her 12-year-old sister, Malia with her sense of cognition, asked questions about how the women and children were treated and kept at the female dungeons in the Castle.

Commenting on why the US President did not address the people of Cape Coast, the MP noted that it was part of the US security measures for the protection of the first family.

Fritz Baffour, who had served on the Ghana Museums and Monuments Board as chairman and acted as Managing Director of the Ghana Tourist Development Company, said the castles were used to hold slaves before they were loaded on ships and traded in Jamaica, the Americas and the Caribbean.