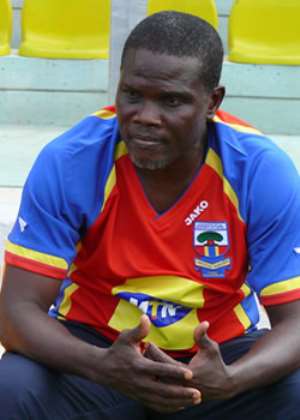 Accra Hearts of Oak Wednesday put their league championship aspirations in real danger after yet another draw at the Ohene Djan Stadium.

Hearts failed to beat visiting Bechem Chelsea in their midweek game and are on the verge of surrendering the top perching on the table to rivals Asante Kotoko, who play Sekondi Hasaacas Thursday.

With the draw, Hearts have 48 points and 8 goals, while Kotoko, who have 45 points and 11 goals, would pick the top spot with a win. The league has only two more games to go. See League standings.

Heavy rains are reported to have rendered the Baba Yara Stadium too soggy for the Kotoko/Hasaacas encounter, necessitating the postponement.

Hearts' desperation has been mounting since the second round of the league which has seen them embark on a spiritless campaign. They even had a 14-point buffer at the beginning of the second round, but the sloppy play has seen them cede all that advantage and now have virtually nothing but prayer to bank on for a slip by Kotoko.