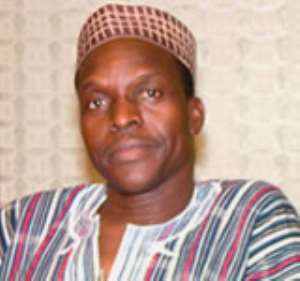 
Majority Leader, Alban Babgin has described as “awkward” the Minority's decision Monday to abstain from activities of the House until the Privileges Committee rule on allegations of bribery made against them.

Members of the Minority Monday walked out of parliament and swore not to partake in any activity in the House after MP for Sene, Twumasi Appiah, accused them of selling their votes before approving the controversial 70 per cent sale of Ghana Telecom to Vodafone UK last year.

A member of the Minority, PC Appiah-Ofori in an interview with the Enquirer Newspaper and later Joy FM, had accused the minority, who were then in the majority of collecting an amount of $5,000 each for approving the sale and purchase agreement.

The allegation has been forwarded to the Privileges Committee of Parliament by the Speaker, Mrs Joyce Bamford Addo, but some members of the Minority have vowed to take legal action to clear their name.

In the midst of the controversy, the Majority Leader told Joy News' Sammy Darko the Minority are hiding behind this accusation to sabotage government's activities.

The House prior to the walkout of the Minority was debating a $300 million loan agreement from the World Bank and had to defer proceedings.

Hon Bagbin said the majority and its allies can raise the numbers to vote on the loan agreement but stressed such a decision will take away the value attached to the agreement.

He said in the true spirit and interest of Parliamentary democracy, the input of the Minority should be incorporated in the approval.

But the Minority Chief Whip, Frederick Opare Ansah said the decision to abstain from activities in the House was not to sabotage government activities but to clear the image of Parliament, which he said, had been tarnished.

“If we are accused of selling our vote, we cannot vote until the matter is settled,” he pointed out.

“Parliament is perceived by the public as an institution where people sell their votes, “he said, insisting, “we will abstain until the matter is determined.”