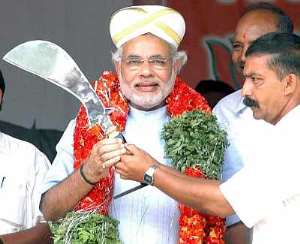 Due to the ill health of the former Prime Minister of India & senior Bharatiya Janata Party (BJP) leader Atal Behari Vajpayee, the Bharatiya Janata Party declared it's another senior leader Lal Krishna Advani as its Prime Ministerial candidate. This is also not true that Advani was undisputedly declared the Prime Ministerial candidate of the party. Even though no differences seem to be there during the election campaign, but the questions raised by another senior party leader Bhairon Singh Shekhawat regarding the candidature of Advani, that too just before the announcement of elections, can't be ignored. This is just a small example of internal differences in the party. As far as the alliance partners of the BJP led National Democratic Alliance (NDA) are concerned, most of them are secular which as a result of direct opposition from the Congress in their respective states, are in alliance with the BJP. Whether they would remain with the BJP after elections & help in making Mr. Advani the Prime Minister, it is to be seen. Hopefully they would clear their stand after 16th May & it would also be clear after election whether a hardcore rightwing politician like Advani is accepted by the secular democracy or not.

Yet the poll procedure is not completed for the fifteenth general elections, the talks for the Prime Ministerial candidate for the sixteenth general elections are started by the BJP. The party strategists are talking about the Chief Minister of Gujarat, Narendra Modi. While the BJP is projecting Narendra Modi as an eligible, dexterous & progressive leader, the critics of Modi are regarding this action of the BJP as very unfortunate for the country. What the opposition parties & the critics are saying regarding the candidature of Modi as Prime Minister in future is a different issue. The description by the Supreme Court regarding the controversial image of Modi is enough to understand the truth. It was the alleged complicity of Modi & his partial attitude in the Gujarat genocide of 2002 which compelled the then Prime Minister Atal Behari Vajpayee to say that “what face he would show to the world?” These words by the Prime Minister of the country are sufficient to understand the eligibility & capability of Narendra Modi. At least, Vajpayee was not compelled by the Congress or the left parties to pass these comments about Gujarat genocide & Modi. Honourable Supreme Court of India has also criticised Narendra Modi and his Government many times in this regard.

Undoubtedly the mandate of the people is final in the democracy of India. But the fact is that here most of the voters can be influenced by the emotional issues. The whole nation knows that how the corpses of the 58 karsevaks (volunteers) were moved along with the resentful mob in different parts of Gujarat & in this way the atmosphere for the communal violence was prepared in the whole Gujarat. It is alleged that Narendra Modi, his government & even the state police became impotent during the carnage of a particular community. Even if we assume it as just propaganda against Modi, then not to be able to control the communal violence doesn't raise the question mark on the “dexterous” image of Modi? What was the reason the Supreme Court of India compared Modi with 'Nero of Rome'?

In fact there is a reason that Gujarat is being called the laboratory of the Rashtriya Swayamsewak Sangh (RSS). It is a part of the long term strategy of the RSS that the votes of the Muslim minority are totally ignored by the BJP. In fact in Gujarat there are attempts of social boycott of Muslim minorities. Not even a single Muslim is made candidate by the BJP for the parliamentary elections & even during the state Assembly elections. Even the BJP don't use its numbered Muslim mascots in Gujarat. Some BJP leaders may through media try to convey that the Muslims of Gujarat are with the BJP or Narendra Modi but the ground reality is that the BJP people don't ask for votes from Muslims there. Instead, they wanted to polarize the votes in which they seem successful till now.

The acceptability of Narendra Modi at international level is clear by the denial of visa by the US. Regarding the internal acceptability, it is clear from the action of the Chief Minister of Bihar Nitish Kumar whose party Janata Dal (United) is an ally of the BJP, under which he didn't gave his consent for that fire brand leader Narendra Modi to campaign in Bihar. As a result during the elections Narendra Modi was not able to enter Bihar. It can be understood that if the person who destroyed the social & secular fabric of Gujarat, the land of Mahatma Gandhi, is not able to enter Bihar, the land of Buddha, due to his firebrand style. God forbid, if he becomes the Prime Minister of India, the country of Unity in Diversity, then what harm would it do to the secular image of this country for which it is known in the world. We can hope that this country of patriots like Mahatma Gandhi & Dr. APJ Abdul Kalam would forever remain a secular country & whenever any person would hold the office of the Prime Minister of India, he would follow this tradition.