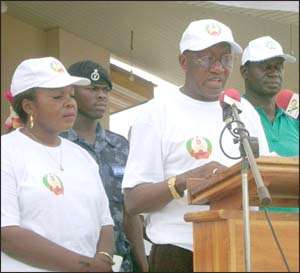 Ashanti Regional Minister WORKERS IN Kumasi, the Ashanti Regional capital, yesterday joined the rest of workers in the world in celebrating this year's workers day with a call on President John Evans Atta Mills to fulfill his electioneering promises on workers welfare.

The workers who converged at the Jubilee Park for the regional celebration charged President Mills to stick to his promise of job creation, decent wages and salaries for workers, as well as respectable pension package for workers.

They wielded assorted placards, some of which read, 'Social Justice For All', 'Mr. President, Sort Out Workers Problems', Give Workers Decent Wages And Salaries', 'Mills, Fulfill Your Election Promises, We're Waiting For The Jobs You Promised', among others to drum home their cherished concerns.

The workers who held a mini demonstration at the event grounds before the commencement of the occasion amid singing and dancing, entreated President Mills to implement the single spine salary structure and the new pension scheme immediately without further delay.

Additionally, the workers charged the first gentleman of the land to sustain and improve social interventions programmes such as the National Health Insurance Scheme (NHIS), the capitation grant and the school feeding programme.

This year's celebration which is the 43rd since the country attained independence in 1957, was under the theme, “Improving The Standard Of living Through Decent Work-A Prerequisite For Sustaining Democratic Governance”.

In attendance were members of the various worker unions which fall under the umbrella of the Trade Union Congress, including Civil Servants Association (CSA), Public Utility Regulatory Commission (PURC), Health Workers Union, Teachers Education Workers Union (TEWU), among others.

Dignitaries, who graced the annual global event which is used to celebrate workers around the world, included the Ashanti Regional Minister, Mr. Kofi Manu Poku, his deputy, Madam Anima Wilson, the Kumasi Metropolitan Assembly (KMA) Chief Executive, Mr. Samuel Sarpong and many others.

The Regional Minister, Mr. Kofi Manu Poku, read the President's speech on his behalf, whilst the Regional Secretary of TUC, Mr. Robert Asekabta, read that of the TUC Secretary-General's at the event which lasted for less than two-hours.

Whereas the TUC Secretary-General's speech urged the government to fulfill the wishes of workers in order to make democracy meaningful in the country, the President's speech primarily congratulated workers and asked them to continue to do their optimum best for the country as government worked hard around the clock to satisfy the wishes of workers.

After the delivery of the two speeches, awards which included electrical gadgets and certificates were presented to deserving workers who excelled in their various fields of endeavour for the past year.

The euphoria which used to characterize previous celebration of the day in the Garden City was virtually absent this time around, as workers did not turn up in their numbers for this year's commemoration.